In this new BBC adaptation of Andrea Levy's The Long Song, writer Sarah Williams explores the historic catalyst for the British abolition of slavery

2 CW readers are interested
The Long Song review 4 The Long Song review Euan Franklin
There’s a glimmer of a new kind of period drama on British TV at the moment. The traditional style of the genre – with a camera that barely moves and the editing kept at a steady, conservative pace – is being thrown away, breathing some modernity into stories set in the past. ITV kicked it off with their stylish re-imagining of Vanity Fair. Now the BBC, after providing nothing new in the tedious Death and Nightingales, have finally stormed back in the lead with The Long Song.

Based on the Booker-nominated novel by Andrea Levy, this three-part miniseries is set in Jamaica on the cusp of the British Abolition of Slavery during the 19th century. July (Tamara Lawrance) is a plantation slave ripped away from her mother (Sharon Duncan-Brewster) as a child and used as a maid in the great house. The house’s unhinged mistress Caroline (Hayley Atwell) orders July around as her brother John (Leo Bill) runs the plantation. 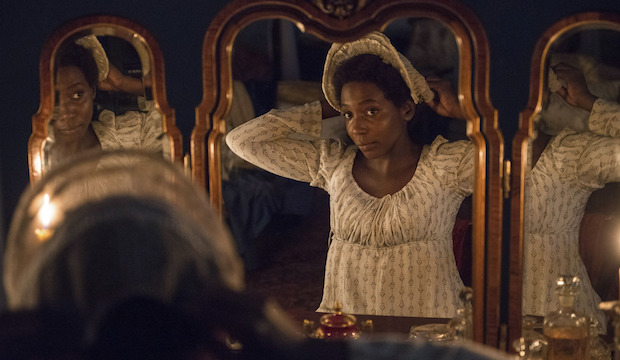 As serious as the premise sounds, The Long Song begins with a wave of cheekiness. Writer Sarah Williams and director Mahalia Belo seem to poke fun at how most period dramas start – following the upper class problems of a rich white woman, Ave Maria played serenely in the background.

Then the camera suddenly flies from the balcony, like a Baz Luhrmann shot, to the nearby homes of the Jamaican slaves. An older July blesses the voiceover, stating: ‘If that is the story you wish to see, then be on your way. Go. Yes, go!’ before the camera arrives at the younger July, flicking her eyes up toward us.

In a historically horrible environment, The Long Song is full of these much-needed moments of humour. The slaves play pranks on their white masters, like using a bed sheet instead of linen for the table – since none of them would notice the difference. 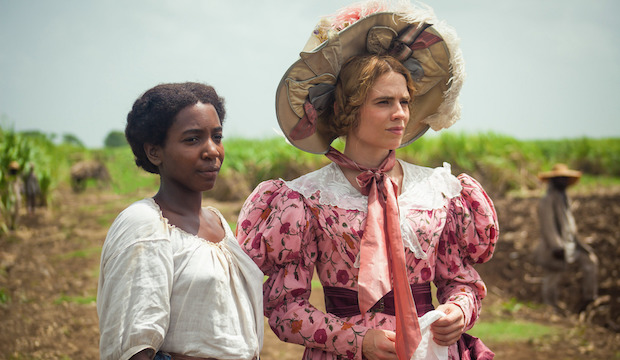 But the comedy and light-heartedness can suddenly be torn away in a single sentence. Caroline notes the lack of buttons on the cuffs of her dress and July feeds her a lie about their whereabouts, which the latter chuckles at without realising. Caroline’s quick to correct her slave, stating: ‘I could have you whipped’. Humour is removed completely.

The story, too, grows harrowing – moving from a false sense of security into some real terrors, and chaos inevitably re-ensues. Episode one ends with new overseer Robert Goodwin (Jack Lowden) announcing the news that slavery has been abolished in Britain, but we know the nightmare isn’t over. With this series, it’s wise not to trust such hopeful claims.

The Long Song unfolds like a Scorsesean drama: freezing frames, speeding them up, reversing them back, with a voiceover that explodes with a sense of rebellion. Vanity Fair couldn’t even dream of catching up.