Cleaning Up, ITV's upcoming comedy-drama is a London-based adventure full of sadness, hilarity, and fun. Actor and singer Sheridan Smith talks to us about the series 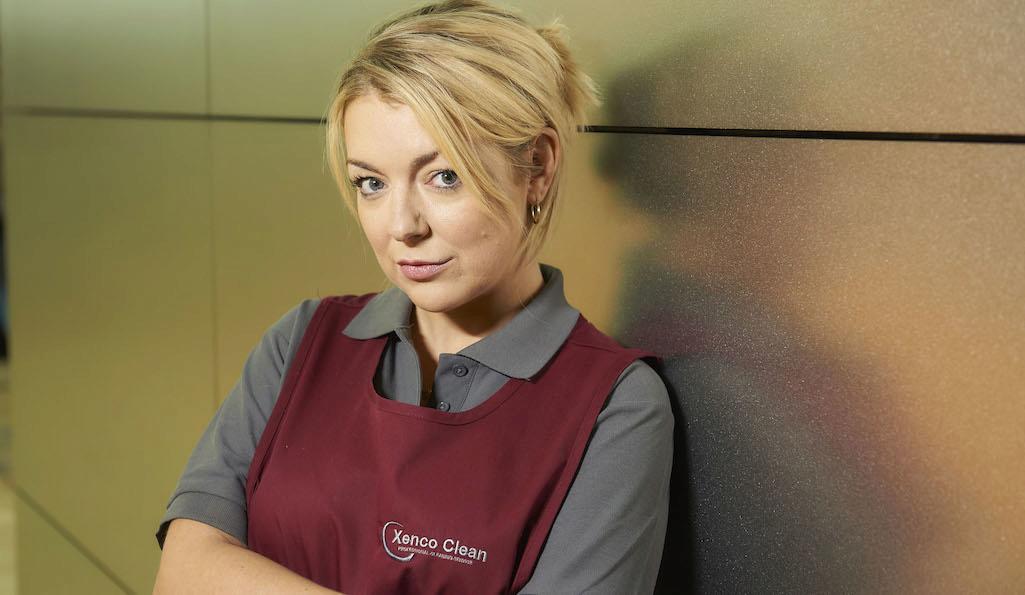 Sheridan Smith plays Sam, a cleaner who wants to cheat the system
Within five minutes of meeting Sheridan Smith, you feel like you’re down the pub. Even when she’s being surrounded on all sides by journalists staring at her and asking questions, she treats everyone like a mate – saying precisely what she thinks with an eager sense of humour. She’s also an exceedingly honest person, often scared about what she’s just said.

‘I’m gonna say all the wrong things – I’m being too honest nowadays.’

Many of her sentences start with ‘to be honest’ like she doesn’t have the capacity to lie, despite that being her living. After fumbling on a question, she says of her answer: ‘That was shit, wasn’t it?’

Sheridan’s career started and continued with a series of overlaps, starting with a role in The Royal Family, leading into the pub sitcom Two Pints of Lager and a Packet of Crisps, then Gavin and Stacey, then a string of stage shows like Funny Face and Legally Blonde – on and on. 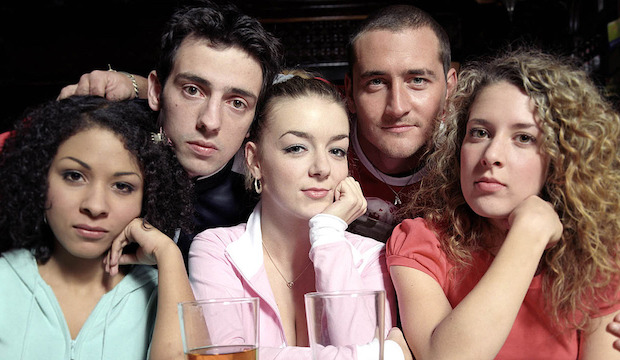 Then, after a period of stress and drinking and diagnosed anxiety and tweeted retorts, she decided to take a break from it all. But even despite that, she’s been on our screens every year for nearly 20 years. When asked if she ever watches herself, she says ‘No, no, no – not anymore. And I don’t read anything either. (laughs) I’ve learned.’

Although this interview keeps this aspect of her career in the distance, it clearly weighs on Smith’s mind:

‘Of course, people are always gonna have an opinion – I’ve learnt now that you can’t be like 'love me, love me' to everyone, because they’re not going to if they don’t want to.’

Smith stars in the upcoming ITV comedy-drama Cleaning Up, airing in the new year. She plays Sam, a mother and cleaner in Canary Wharf who overhears secret details of some dodgy insider trading. Being a gambling addict, she figures out how to cheat the system while scrubbing the carpets and taking the kids to school. 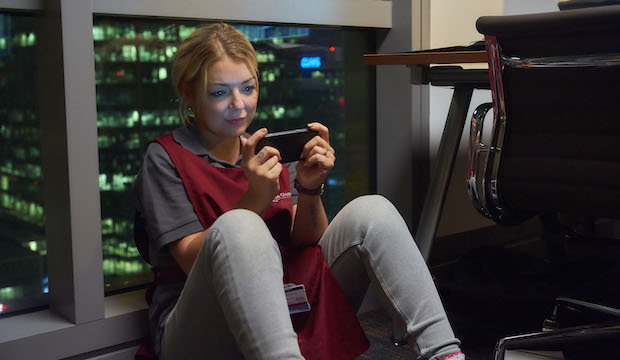 Sam has an addiction to online gambling, making her perfect for the world of insider trading

‘Sam’s so flawed like many people, like myself,’ says Smith. ‘I think the audience – hopefully, if we’ve done our job right – will be torn between what they think of her.’

Sam is almost a Robin Hood figure, taking advantage of the despised and privileged few. And despite her illegal actions, it’s hard not to cheer for her.

‘if you’ve got to bring up two girls and you’ve not had those opportunities in life and you do want the best... There is a big drive. Of course, she’s got the gambling addiction, but she wants better for her girls. And at the end of the day, she’s a good mum, she’s got a good heart, she’s a loyal person to her friends – but she just makes some bad decisions.’ 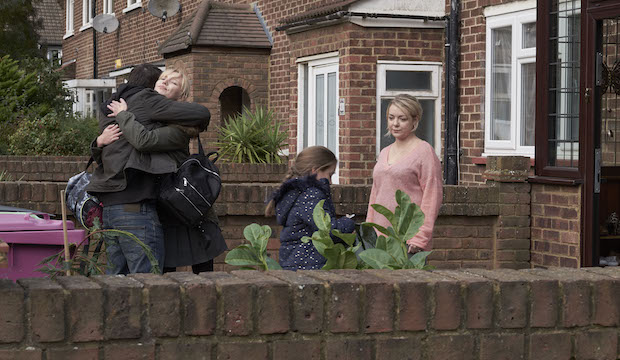 Sam is a separated mother of two

Is Smith a gambler herself?

‘I’ve got plenty of other vices, but that isn’t one that I’ve ever done. I used to know people in the village who went to Bingo…’

If you have the intelligence and desperation to indulge in insider trading, gaining advantage in the markets, then it’s easy to see the appeal. All that money, going to the wrong people. At least in this case Sam deserves the money… doesn’t she? Would Smith do the same? 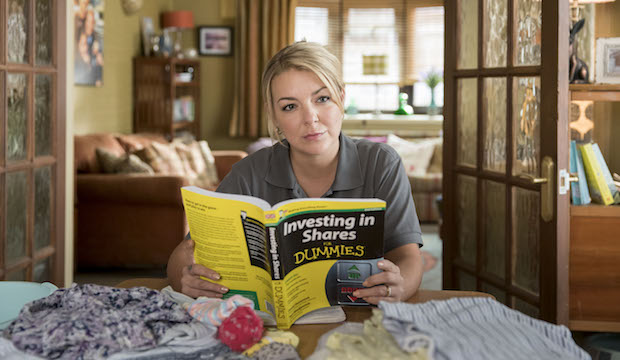 Sam does her research

We watched her earlier in the day at a special screening for Cleaning Up at the Soho Hotel in London. Immediately, it’s hard to imagine anyone else playing that role. Smith inserts her warm and cheeky personality into most of her roles – even the most dramatically tiring, like recently in the BBC drama Care. When she saw a first draft of the script, she became immediately enamoured with the character she was reading.

‘I remember the opening bit of it was like “she’s running across the street, she hasn’t had time to put her shoes on, she’s dropping her handbag, she can’t find her cashcard”, and I was like, “I really like this already.”’

She talks about her character’s transition from nothing to money, as an actor, switching mop-heads for lovely restaurants. She felt her opinion of Sam start to change.

‘I could understand why the character wanted to do that. The temptation of it, I guess.’

But despite Smith's attraction to the character, it was also scary to accept the role. She’s far more comfortable playing real people like Cilla Black, Julie Bushby or Lisa Lynch. She couldn’t rely on an actual person when portraying Sam.

‘I found it hard not having the research. I’ve kinda relied on getting to know people, meeting them, meeting Mrs Biggs, meeting Cilla, meeting Julie in Moorside, and lovely Lisa Lynch – you know, just wanting to tell someone’s story. That’s what I thrived on, so this was a bit scary. I felt on set sometimes like “ahh, I don’t know what I do here”’. 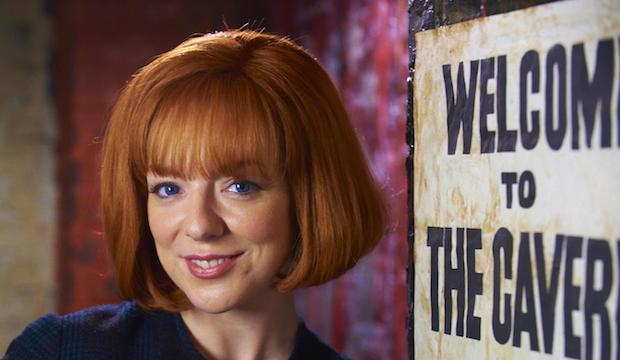 For the role, she met plenty of cleaners and even participated in a cleaning course.

‘We all had to wear our tabards, so we’d know what was in what thing, and what spray, and what colour… I mean, I wrote it all down. I was quite good by the end.’

A key theme and conflict in the series is the vast inequality between the poor cleaners and the rich bankers. At the Cleaning Up Q&A with writer Mark Marlow, he described coming up with the idea from watching the Oliver Stone film Wall Street and seeing cleaners deep in the background behind the bankers. Smith felt that harsh class divide when watching the first episode.

‘Even when we’re doing the big scenes where we had loads of stockbrokers arriving [in the morning], and the cleaners are still there [from the night before]… they don’t even notice they’re still there. You’re so unseen to them. That is an interesting part of it. Sam keeps saying “they’ll never suspect us”. That’s terrible really because it’s like, well why can’t it be?’

Smith prepares her best posh voice: ‘Just because we haven’t been educated like you.’ 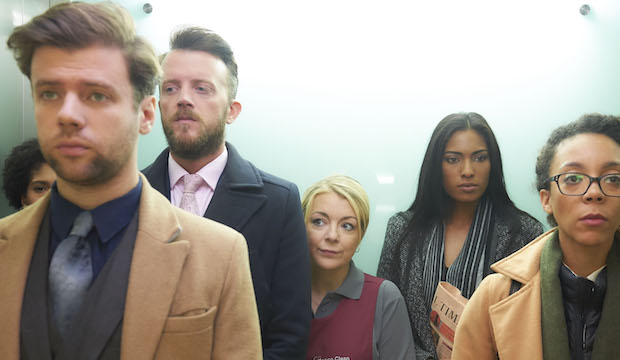 Cleaning Up jumps from upsetting social drama to hilarious buddy comedy to tense heist thriller. It’s a testament to the quality of Mark Marlow’s writing that he’s able to encapsulate all these genres within 45 minutes and make it thoroughly entertaining. For Smith, one of the best shooting days was for a scene in which Sam’s planting a microphone in the ceiling of a banker’s office – in the hope of hearing inside information.

‘[Director Lewis Arnold] actually played Mission: Impossible music for the whole thing, and it fitted it perfectly. With a comedy-drama, there’s lots of light relief and I love that. There is the sad stuff and the intense stuff with all the debt and family life, but there’s also lots of fun stuff with the kids and all that heist stuff which is hysterical.’