Sheridan Smith and Alison Steadman star in BBC's Care, about a family struggling to cope with the horrors of dementia

Care review 3 Care review Helena Kealey
It’s bound to happen – to ourselves or somebody we know. No signs, no warning. A disease or illness or disability hits and changes everything. It’s just a matter of time.

This is what happens to Mary (Alison Steadman) as she drives along with her grandchildren. She suddenly suffers a stroke, crashes the car, and she’s later diagnosed with dementia, needing round the clock care – not only affecting Mary’s life but those of her two daughters Jenny (Sheridan Smith) and Claire (Sinead Keenan).

Jenny’s a single mother of two with a clueless ex (Anthony Flanagan) and not much money coming in. Mary helped take care of the kids, but she’s rendered almost immobile from the stroke. Jenny must take care of her mother, dealing with the painful effects of dementia, finding decent accommodation, and battling with the horrors of the NHS. 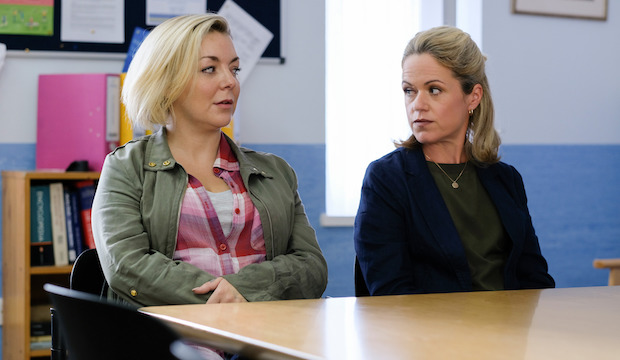 Care has admirable intentions, with the writers Jimmy McGovern and Gillian Juckes (based on her personal experiences) mapping out how it all works when a dementia patient is admitted, what they’re going through, and how the illness manifests itself. They capture all the stress and misery involved – at its most heartbreaking when Mary attempts to communicate but only meaningless babble comes out. Wispy subtitles show what she’s trying to say, her pain and strain seeming to reach out of the screen and grab us by the throat.

However, Care is more like an educational video rather than a full fleshed narrative. The writers are so fixed on showing the dementia experience, as well as taking political jabs at the NHS, that the characters have little room to breathe. 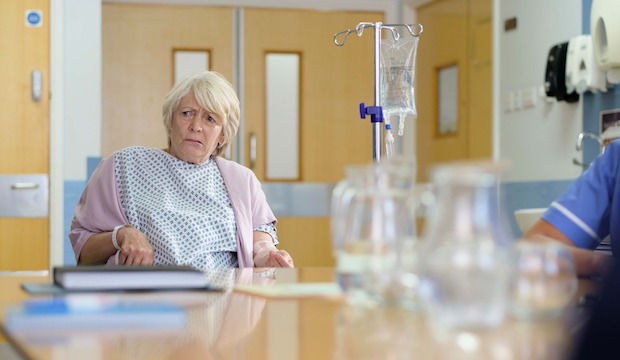 Thankfully, Smith and Steadman are there to create breathlessly believable performances out of little material. The talents of Smith in particular aren’t wasted (though aren’t fulfilled to their potential), bringing a vivid face of anxiety while also being very funny. When her ex inquires into a date she’s going on, she says ‘And you know what? He’s gonna fuck my brains out all night!’

It was clearly a struggle to get the film under 90 minutes. Many revelations or just simple facts about the characters aren’t given until the last minute. Oh, Claire has a husband? And they’re trying for a baby? Mary supported the NHS her whole life? Did she? Apparently so.

There are uses for Care, and it’s easy to imagine it being a guide and comfort to families suffering from the same problem. But it’s not a movie so much as a pamphlet, abundant with politics and a depression of character. Without the intensely excellent performances, it wouldn’t even stand up straight.