It’s similar to a scene in Vittoria De Sica’s classic neo-realist film Bicycle Thieves, in which a son follows his father across a road and nearly gets run over by traffic (the father doesn’t even notice).

My Brilliant Friend presents many such instances, demonstrating the danger, carelessness and violence of this particular world, especially for children – bringing Italian Neo-Realism (1944-1952) to the modern day. And although this HBO series is more lavish and refined than what these post-war Italian filmmakers would've preferred, it's no less real and hard.

Elena, in old age, receives a call on her smartphone. Her lifelong friend has gone missing. This prompts her to open up a laptop in the dark, and type out her whole story. She takes us to Naples in the ’50s, when she was a little girl (Elisa del Genio). She’s smart, and top of her class. She becomes curious with a girl, Lila (Ludovica Nasti), who's as intelligent but far more rebellious. They both endure the anger and horror spilling from their environment, growing a friendship among the turmoil. 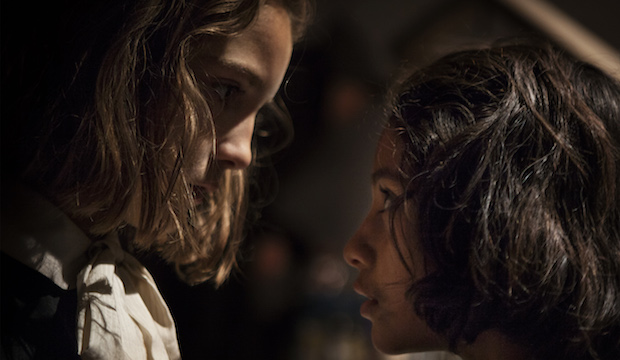 Although My Brilliant Friend doesn’t achieve realism in the technical sense, the higher production values bring us closer to the emotions of the people – and it’s a frightening picture. The sun is always shining but through a grey filter, providing a gritty edge to the picturesque visuals (similar to cinematographer Sayombhu Mukdeeprom’s work on Call Me By Your Name and Suspiria).

The colours are muted, much like the townspeople, who walk by in silence as a man is beaten half to death or when a woman throws kitchen appliances out the window (nearly hitting a child). There’s a panic not to get involved, exacerbated by the local loan shark Don Achille (Antonio Pannarella) who weakens everybody into cruel obedience. A wrong word and you’re punished, maybe even killed. Director Saverio Constanzo doesn’t shy away from the pain, he makes sure that every slap, punch, and blunt object is felt. And through the eyes of a child, these acts are even more brutal.

My Brilliant Friend is dependant on the relationship between Lila and Elena, and the child actors Elisa del Genio and Ludovica Nasti possess such an immediate, natural connection. It doesn’t even matter if a plot doesn’t present itself – the characters are absorbing enough. This is a startling, shocking, and emotional start to a promising series.