The next BFI London cinema season explores the works of one of the great directors of post-war neorealism, Italian director Vittorio de Sica. 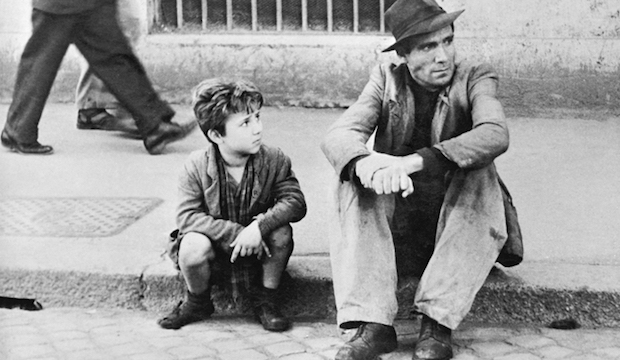 This August the BFI will be celebrating the work of a major figure of Italian neorealist cinema, actor and director Vittorio de Sica, with a full retrospective season of his work.

Often observed as an Italian Carey Grant, de Sica became well-known as a matinee idol and romantic leading man before taking a turn in the director's chair.

Incredibly prolific, de Sica went from appearing in over a hundred and fifty films to, post 1940, trying his hand at directing. His works made a major impact on the canon of post war Italian cinema: commencing with the same light-hearted, fluffy comedies as those he had starred in, his interests then veered towards more arresting subjects in the wake of WWII. Disturbed by the misery that had rocked Italian society, left rife with homelessness and unemployment, his films taking the dispossessed Italian poor at their heart.

CALLING ITALIAN CINEPHILES: A CHANCE TO WIN
The BFI and Culture Whisper have joined forces, offering one lucky reader the chance to win a host of prizes in association with the Vittorio de Sica Italian Cinema season. These include:


- Two tickets to any film in the BFI De Sica season this August.
- A copy of The Italian Cinema Book – an essential guide to the most important historical, aesthetic and cultural aspects of Italian cinema, from 1895 to the present day.
- A copy of the BFI's artwork for the Vittorio de Sica season
- A selection of DVDs from Arrow Films including Bertolucci’s masterpiece The Conformist, plus Giuseppe Tornatore’s loving homage to the cinema: Cinema Paradiso.

Considered my many to be a titan of post war Italian cinema, de Sica's direction showed unforeseen depths of sensitivity, his films exploring poverty and social injustice. Four of those films directed by de Sica received Academy Awards, becoming lasting examples of the genre and true reflections of working-class sentiment.

Best known for directing and starring in the 1948 film The Bicycle Thieves, De Sica collaborated frequently with writer Cesare Zavattini, creating unsentimental studies of humans in all their guises, films that retained great emotional force. Unrelenting in their bleakness, the realism at the core of de Sica's work had a lasting impact on cinematic history.

The BFI's season explores de Sica's richly varied career, from early acting roles to the late works that he directed to great critical praise. Whilst anyone interested in Italian neorealist cinema can find intrigue in the BFI's vast selection, we've picked out four must-see films in the de Sica season. This is classic Italian cinema at its finest: De Sica's best known and most archetypal work, The Bicycle Thieves is a landmark Italian neorealist film about family, poverty and social injustice. 1951’s Miracle in Milan is de Sica's fable for the dispossessed, a fairytale comedy undercut by poverty, it's a shift in tone from his other works but no less direct. A subtly empathetic tale of human resilience, Umberto D. was de Sica's most prided film and follows an old retiree's struggle to survive in a pitiless society.

TAKE A FRIEND FOR FREE WITH AN EXCLUSIVE 2-4-1 TICKET OFFER
To enjoy two tickets for the price of one simply quote DeSica241 online, in person or over the phone (020 7928 3232). For additional information, click here.