Death is trouble enough for philosophers and every human heart, so those who decide to bravely opt out early is impossible to imagine. But Theroux pushes us closer to that unthinkable experience, one we hope never to face, in one his most spirit-wrenching documentaries to date.

In Choosing Death, Theroux visits three people who’ve decided to end their lives early: a man with cancer and a loving family, a mother and wife who’s lived three years after her predicted death date, and a woman on the edge of dementia with no friends or family at all. He delves into each of their situations, examining their lives and motivations, and examines an organisation that helps people commit suicide (The Final Exit Network). 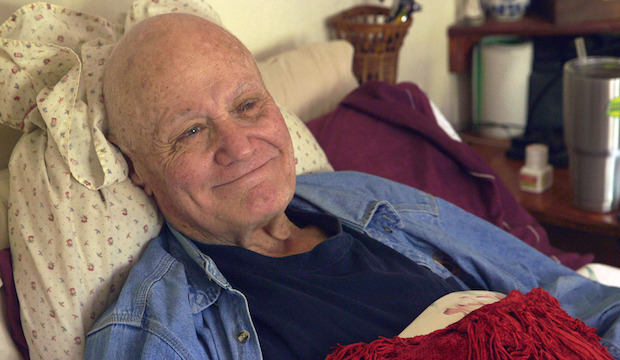 It’s not long before the emotion starts to gnaw at the soul – even the first ten minutes is a downhill struggle – and it only gets more upsetting from there. But the most surprising similarity between all these people is their certainty. None of them are conflicted about their decision, even when surrounded by their friends and families.

They’re comfortable with it, so much so that those with families discuss their eventual suicide in front of their children, who don’t even put up a fight. In fact, they’re often in good humour. The terminally ill Gus, who’s chosen to die by taking a prescribed overdose of medication, looks at the instructions for taking the pills and jokes: ‘Swallow, die, repeat if necessary…’

The personality of Louis Theroux is strong throughout, which is remarkable considering the subject matter. Even when listening to people who say they’ll be dead in a few days, his expression is neutral – he sheds no tears, though looks close at times. Is it possible to imagine another documentarian doing that with such success?

Like with most of his programmes, the rational (Theroux) is colliding with the emotional (his subjects), yet while maintaining a wonderfully cordial relationship with his interviewees. And that makes it all the harder to let them go. Choosing Death is a slow but necessary torture.