In episode 7 of Doctor Who, the Doctor (Jodie Whittaker) is sent a mysterious message from the galaxy's biggest retailer, Kerblam! The TARDIS team go and check it out

Doctor Who episode 7 review 4 Doctor Who episode 7 review Euan Franklin
Whereas in previous episodes Doctor Who has tackled real politics in real history (even recently, with last week’s episode being set during the Partition of India), episode 7 provides politics in space. Writer Pete McTighe flies us to the working environment of the galaxy’s biggest retailor, Kerblam!, in a time when technology has almost superseded humanity with only 10% of the workforce being human.

In the Doctor’s (Jodie Whittaker) TARDIS, the gang receive a mysterious message from Kerblam!, simply saying: ‘HELP ME’. They visit the moon-bound warehouse, which orbits the planet of Kandoka, posing as workers to figure out who sent the message. And despite the statements of assurance and endless health-and-safety regulations, something strange is happening with the robot helpers. 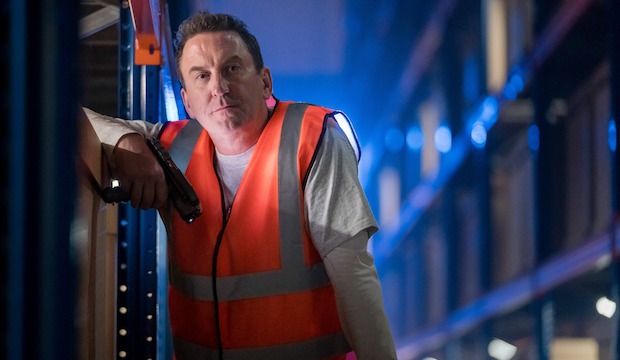 Lee Mack as Dan in Doctor Who

It’s a depressing future ahead. Technology replaces human workers, and the human workers have to work harder to keep up. They can’t see their families, which is the case for Dan (Lee Mack) and Kira (Vanity Fair’s Claudia Jessie) who simply go through the motions. It gets even more uncomfortable when the team are informed of the goings-on in Kandoka, where people’s protests are taking place, and ‘robophobia’ is actually a thing (‘some of my best friends are robots’, says the Doctor).

It’s an attractive premise, especially in where it leads. There’s even radical terrorism (another political allegory that Doctor Who is no stranger to) in response to the weak percentage of human workers. McTighe is also not afraid to be funny, and cruel, to the characters we grow to love. However, the drama that should be felt in certain moments is drastically reduced – the impact of death felt for a second before being noisily swept under the carpet.

But episode 7 is still a enjoyable, engaging, and vaguely emotional journey. The political messages are obvious to grownups without removing the fun for the kids (and the grownups, let’s face it). Even the name ‘Kerblam!’ is exciting.

Charlotte Riley interview: 'We’re gonna end up with a giant green monster that eats everybody!'
Sign up to CW’s newsletter
By entering my email I agree to the CultureWhisper Privacy Policy (we won`t share data & you can unsubscribe anytime).