Get Up, Stand Up! The Bob Marley Musical, Lyric Theatre review ★★★★★

Get Up, Stand Up! The Bob Marley Musical is driven by a magnetic lead performance from Arinzé Kene, but the narrative feels underdeveloped

The making of the musical wasn’t all plain sailing. Get Up, Stand Up!’s original director Dominic Cooke stepped aside in 2020 when the Black Lives Matter protests rightly called out the production for having a white writer and director telling a story rooted in Jamaican culture. Cooke called Dyer, with whom he’d worked on other projects including the National Theatre’s Olivier-winning revival of Ma Rainey’s Black Bottom, asking him to step in and direct instead. Dyer said yes, despite undergoing cancer treatment at the time. (He’s since pointed out in a Guardian interview: ‘To be asked to direct a musical about a guy who died from cancer – the irony was not lost on me’.) 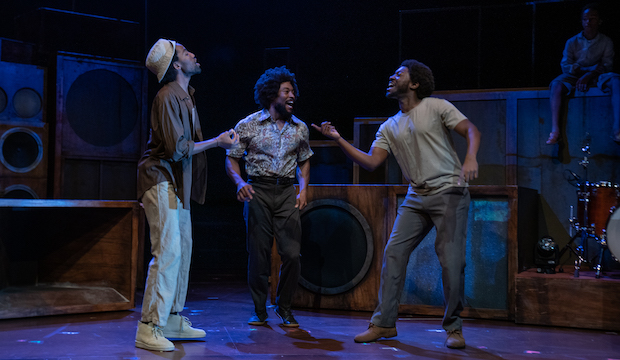 Get Up, Stand Up! takes the audience on a whirlwind journey through the defining moments of Marley’s life. Each scene is a snapshot of a key event, soundtracked by one of the singer’s memorable anthems: young Marley (played on press night by a heart-melting Maxwell Cole) leaving his mother is accompanied by a moving rendition of Could You Be Loved, while his attempted assassination bleeds into an electric performance of I Shot the Sheriff.

Hall and Dyer deliver a faithful, rounded account of their subject. Beginning in the early 1950s with Marley being sent away from his home in St Ann’s, Jamaica, to live with his white British naval officer father (who it turns out has abandoned him), we travel through magical moments including his forming of the Wailers with Peter Tosh and Bunny Wailer. We witness Marley’s tender first words with his wife Rita (and later, those shared with his lover Cindy Breakspeare), the band’s transformative meeting with Chris Blackwell of Island Records, and the singer’s stubborn refusal to cooperate with doctors to treat the cancer on his toe which would eventually kill him at just 36.

Marley’s Rastafari religion and firm belief in the power of Jah are referenced often, positioned as the driving forces behind many of his actions. His critics are given a voice too; as his fame grows, we see him attacked by the press and public for selling out, not caring about the unrest in Jamaica and for being a white man’s hero. 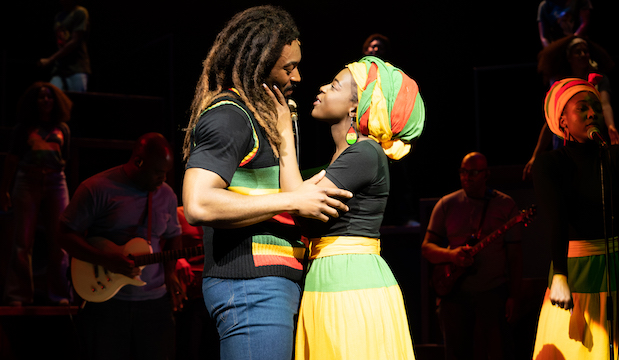 There’s a lot to really like about Get Up, Stand Up!. Lamford’s design, with the help of Tal Yarden’s videography, shifts the action seamlessly between the palm-dotted Jamaican landscape and the dank harshness of winter in England. Charles Balfour’s lighting lifts both the stage and auditorium with bold beams of red, green and yellow. And Lisa Duncan’s costumes meld the flares and vests of 70s fashion in the west with the richly coloured skirts and headscarves popular in Jamaica.

Kene is magnetic as Marley, mastering his mannerisms as well as his music and oozing a breezy, likeable energy. Gabrielle Brooks delivers a stoic performance as Marley’s wife Rita. Her empowering, raw rendition of No Woman, No Cry is a highlight of the production, as is Kene’s Redemption Song, which on press night moves the audience to sing along softly. In the more upbeat numbers – bolstered by the impressive, ground-shaking bass of Tony Gayle’s soundscape – it feels almost rude to sit so stiffly while the cast perform (but hold out, you’ll get a chance to stand and dance at the end). 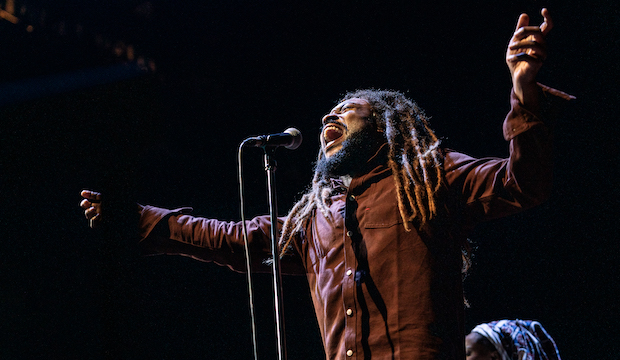 Every time the music stops, however, the show seems to run aground, especially in the slower, stilted first half. Dialogue is stunted, never quite carrying the emotional weight of the major moment being depicted from Marley’s life. In the final scene, an attempt to shoehorn in some present-day political issues with screens either side of the stage showing footage of Grenfell, the climate crisis and the Windrush protests seems like an afterthought.

The pace picks up in the second half when the show finds its groove, but in the final throes, it dissolves into a staged concert, leaving Kene singing back-to-back numbers instead of focusing on Marley’s premature death. This compromising of the narrative leaves the play with little to no actual ending. That said, these final big hitters certainly give an audience of Marley devotees what they want – and many will come just for the opportunity to see them performed so vividly.

Get Up, Stand Up! The Bob Marley Musical