After dazzling in London and New York, Conor McPherson’s poignant ‘play with music’ returns to the West End

28 CW readers are interested
Girl From the North Country, Gielgud Theatre review 5 Girl From the North Country, Gielgud Theatre review Lucy Brooks
After a sellout five-star premiere at the Old Vic in 2017, Girl from the North Country went on to impress on the West End, then on Broadway and in Toronto. The show returns to London for a winter 2019. Click here to book now.
There's enough poetry and narrative intensity in Bob Dylan's music to tell all kinds of stories. But in a 'play with music', writer Conor McPherson (The Weir) weaves Dylan's songs into a story about one family's fate during the Great Depression.

Named after Dylan's 1963 song, Girl From the North Country, the play is set in Duluth, Minnesota during the 1930s. It follows 'a family adrift'. 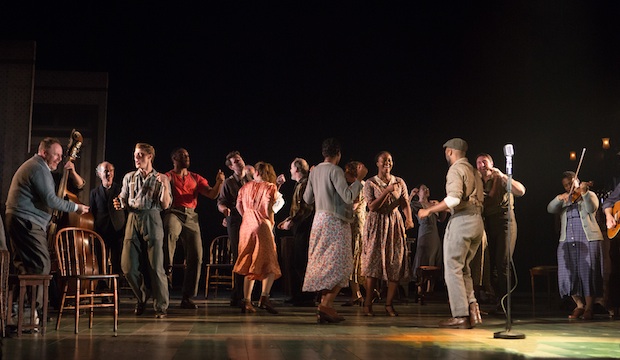 Nick Laine runs a guesthouse. Every day, he creeps closer to defaulting on its mammoth mortgage. His wife Elizabeth is lost in a haze of early-onset dementia. Their son is a have-a-go Hemmingway, drinking his way through literary aspirations, unemployment and loneliness. Marianne, the black baby who was abandoned in one of the guest rooms, is all grown up with no partner and her own child growing inside her.

Waifs and runaways come and go, all with their own stories and secrets. The whole cast of 20 actors and musicians is impressive (particularly in capturing the Duluth dialect). Gloria Obianyo's Marianne is both doleful vulnerability and defiant. We sense that were it not for the restrictions placed on her by society and the economic hardships of the time, she would be independent, strong and self-sufficient as a single mother.

Shaq Taylor plays Joe Scott with a stately dignity that sits powerfully at odds with the racial prejudice he’s been subjected to in life. But it’s Katie Brayben who steals the show, playing distant wife and mother Elizabeth with a raw and often eerie fury. 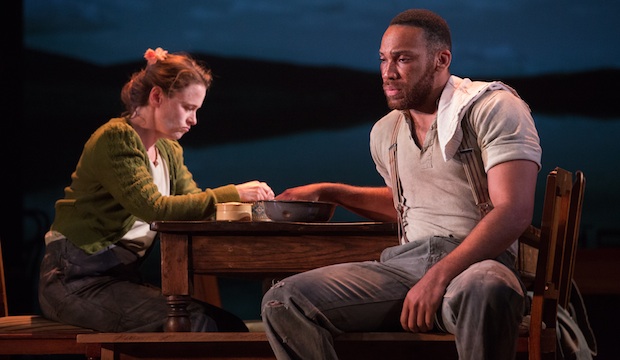 ‘Pain comes in all kinds: physical, spiritual and indescribable,’ we are told in the opening narration. And, over the course of two and half hours, every kind of suffering shimmers with life and is offset with bitter, brief flashes of hope.

There’s a striking symbiosis between the stories and Dylan's songs. The bluesy base, haunting strains of harmonica and lyrical beauty are artfully entwined through the drama.

Girl From the North Country is not a story written around the classics or a case of 'Mr Tambourine Man' shoehorned into a script. It's emphatically not a musical or a greatest hits compilation to titillate fans. (This Dylan-disciple theatre reviewer and her can't-name-one-of-his-songs companion enjoyed the show in equal abundance).

McPherson takes tracks spanning 1963-2012 and inserts them into one winter in 1934. He describes it as ‘a conversation between the songs and the story’; they illuminate each other and embody the storytelling heart of folk music.

The effect is transcendent.

Girl From the North Country

Girl From the North Country