After dazzling in New York, Jackie Sibblies Drury’s Fairview interrogates our preconceptions of race at the Young Vic

4 CW readers are interested
Fairview, Young Vic review 5 Fairview, Young Vic review Anna Scriven
After a radical production and sell-out run in New York, Fairview is making its UK debut at the Young Vic. Jackie Sibblies Drury’s play has won multiple awards including the 2019 Pulitzer Prize for Drama and the Susan Smith Blackburn Prize for female playwrights. Now we can agree such prizes are well deserved: Fairview is astonishing and truly a play for our times.

There are so many formal and dramatic surprises in the show that to describe them would be to spoil the experience of seeing this play. Fairview moves from the bourgeois to the bizarre to the bonkers and every minute is glorious. You truly have to see it to believe it.

What can be said is that it is a dramatic comedy about an African American middle class family. A major theme deeply rooted in the play is how black people are unrelentingly watched, judged and commented upon without their consent. That this voyeurism is so ingrained in our society it is taken as a given by other races, particularly white people.

Deconstructing racial stereotypes is playwright Drury’s playground where no one is safe. Her interrogation is at times subtle, at others brash, and if you can believe it, sometimes it’s simultaneous, but at all times this is a razor sharp dissection of identity politics. This play is also a social leveller. Its direct address to the audience is a prudent reminder of the democratic space that theatre - and the world - should be, but isn’t. 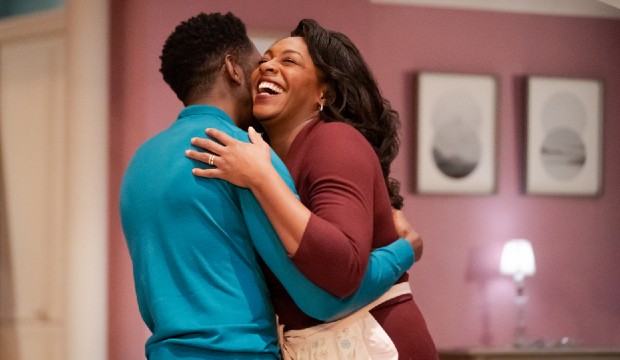 The entire creative team is a well-oiled machine working towards the common goal of deepening every possible meaning the play has to offer through the various theatrical tools at their disposal. Set designer Tom Scutt has sewn lavish, detailed minutiae throughout the production. Lighting designer Jessica Hung Han Yun provides outrageous moments of disco pyrotechnics, constantly surprising the audience with lightning jolts of coloured light.

The cast work as a highly regimented yet playful ensemble. Naana Agyei-Ampadu particularly shines as bombastic sister Jasmine, however, each actor on stage is dynamic, endearing and plays a significant role in heightening the underlying meaning of the play.

At the heart of the show is director Nadia Latif, who is a Young Vic Genesis Fellow and Associate Director. This kaleidoscopic work is her directorial debut in the Young Vic’s main space, and she has mastered this challenge with flying colours. You can be certain you will soon see her name in lights.

Take a risk, get out of your comfort zone, and go see this contemporary masterpiece in all its prickly glory.

More tickets for the sold out run of Fairview are now available as the show extends its run will extend until Thursday 23 January 2020 Click here to book.