When Friel died in 2015 the Irish playwright was hailed as 'a towering figure of the stage' and Translations was remembered as 'a national classic', a great 'triumph' and arguably the greatest play of his career.

The three act play has been performed all around the world and studied widely as part of UK schools' National Curriculum. Now, director Ian Rickson leads an atmospheric and affecting revival at the National's Olivier Theatre.

Set in 19th century agricultural Ireland, Translations is a lyrical exploration of language and nationhood. Drawing on George Steiner's study of the strange, inexact nature of translating, the play was inspired by Friel's own grandfather, who taught classics to peasant farmers. 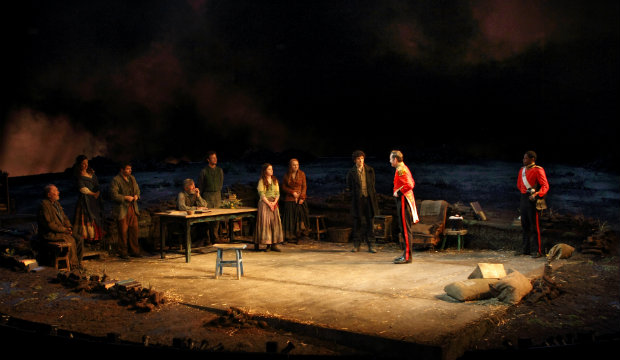 The ‘hedge school’ in this production is a crude collection of tatty stools, surrounded by rolling hillsides of Baile Beag and thick, low clouds designed by Rae Smith. Ciarán Hinds gives a rousing performance as the drunken schoolmaster who likes to proclaim his wisdom in uncompleted lists of three and leaves most of the actual teaching to his lame son Manus (Seamus O’Hara).

Lessons are a lively affair, sparking with local gossip and paid for with a pitcher of milk or a few coins. Though English soldiers have set up camp beyond the village and a new National School is about to be built, rural life continues as it always has.

But the equilibrium shifts when prodigal son Owen (Colin Morgan) returns home after finding his fortune working with the British army.

He’s working as intermediary and translator, assisting the British government in mapping the rural Donegal area and replacing Gaelic place names with their English equivalents. This simple act of translation sends shockwaves through the local community, encapsulating the troubled relationship between Ireland and England.

From the extravagant, silly charade of communicating in the absence of a shared language, to the troubling erasure of a nation’s history, this fine revival of Friel’s poignant play feels all too relevant for contemporary audiences.

Female writers and directors the National Theatre needs to champion
Sign up to CW’s newsletter
By entering my email I agree to the CultureWhisper Privacy Policy (we won`t share data & you can unsubscribe anytime).