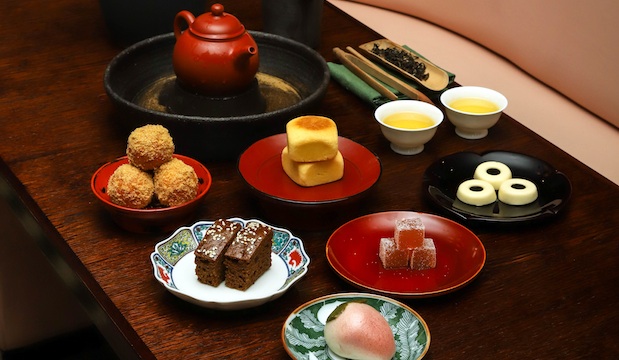 The afternoon tea ceremony takes place on the ground floor of the restaurant’s two-storey building, and is available daily between 12pm – 5pm. With its wooden panelling, tea-dispensing kiosk and large ceiling fans, stepping into Xu feelings like stepping back in time. Meanwhile the restaurant’s marble counters, all-round plush interiors and smooth music create a calm-meets-indulgent atmosphere. Once you’ve been handed a welcome glass of seasonal cold brew tea (summer strawberry at the time of our visit) you’ll soon find yourself settled into the experience. 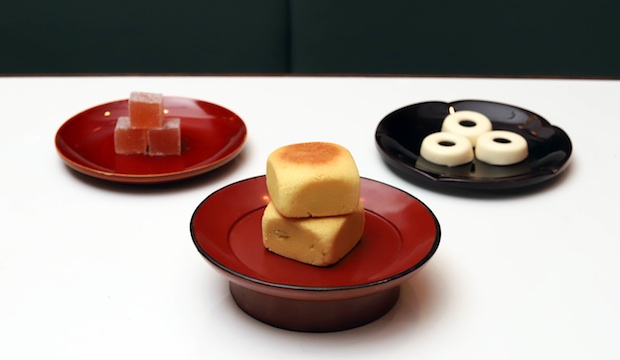 Guests are then invited to pick two teas from the menu – the waiters will happily talk you through the options and suggest popular brews from the exotic-sounding list. We were guided towards the Tie Guang Yin tea to accompany our first course, which had a savoury flavour to it with nutty, smokey notes. This is afternoon tea with a side of showmanship; a wide, shallow stone bowl arrived containing the teapot and cup, and hot water was poured over both to heat them before the tea leaves were added.

The tea came with three savoury morsels – each a more delicate and refined affair than the bao buns Xu’s owners are known for at their other (rightly popular) outlets. A sweet potato taro dumpling was sticky, gooey, drizzled in a green oil and lent a tang by a topping of spring onion. Meanwhile the Char Sui Girolles Puff was crisp, unusual and morish. The third dish – a jelly-like bowel that bore a striking resemblance to a chive-garnished crème brûlée – turned out to be steamed egg. This was a little harder to get on board with, but hey – you don't come to Xu for a conventional afternoon tea. 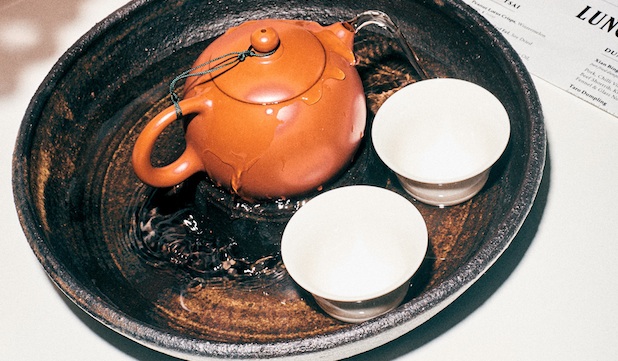 Our second tea arrived in time to accompany six sweet nibbles. This time we went for the Hong Yu: supposedly one of the most popular teas in Taiwan, it was fruity, sweet, aromatic and refreshing. The sweets themselves varied in deliciousness; the fried peanut mochi was a particular highlight – like a warm doughnut coated with nutty, sugary shavings. The pineapple cake was also a hit, appearing like an oddly shaped fig roll but with a shortbread-esque outer layer and scrumptious centre. The steamed red bean bun was a quality take on a classic pud, but the Hei Tang cake was a little plain and dry, and could have benefited from being more syrupy. All round, though, this is a bold and exciting take on afternoon tea, that slices through what is usually preserved as a quintessentially British affair and sprinkles it with unusual elements.

Gold Whisper members can enjoy 10% off and a free drink at Xu Taiwanese Tea House until the end of September. Head to 'Gold Benefits' to redeem this offer. 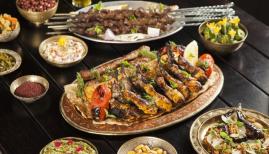 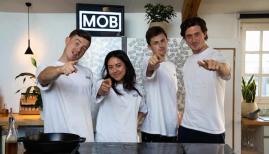 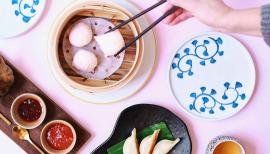 The best London restaurants to eat at with children 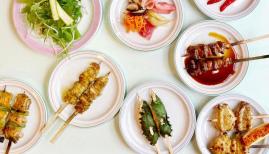