It's rare, even in London's vigorously eclectic culinary culture, to experience a restaurant that is authentically and endearingly different. Kyseri, bringing the ingredients and dishes from Cappadocia in the Anatolia region (Kayseri is a town famous for manti – Turkish dumplings) is such a place, aptly situated in the increasingly foodcentric Fitzrovia.

Selin Kiazim, who trained with Peter Gordon at Providores and run the kitchen at the late Kopapa – which used to be one of my absolute favourite places – decided not to replicate her first restaurant Oklava in Shoreditch, but to challenge herself to produce an entirely new menu.

Kyseri is a small cornerhouse dining room with an open, happy vibe and, to my mind, amusingly retro banquettes and tables barely large enough to encompass the feast you just have to order – as everything on the menu sounds so enticing, especially when perused with a sumac martini of gorgeous pink hue in hand. 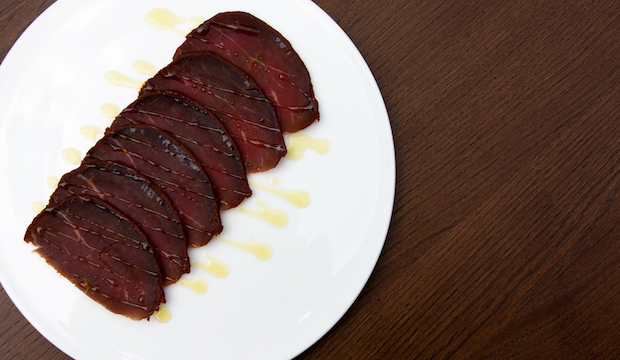 Sour cherry and beef manti are the showstopper: tortellini sized pasta (traditionally they're far smaller) that i made and carefully with deep, nuanced flavours and accompanied with a pepper inflected yogurt sauce, toasted pinenuts and thyme. Veal sweetbreads, crisp on the exterior and meltingly soft within, served with wet garlic, hazelnuts and lemon are sensational too as is charred hispi cabbage with candied mandarin and sesame.

Finish with a traditional dessert of baked mahlep (cherry kernel flavouring) with roasted whole cherries and an almond crumble that highlights the sweet and sour balance so integral to this little-explored cuisine.

Be adventurous in choosing a Turkish, Armenian or Georgian wine chosen by co-owner Laura Christie, these are revelationary too, and ungreedily priced. Kyseri is a culinary gem that deserves wide acclaim for boldly bringing an unfamiliar cuisine to London with such assured yet unfussy aplomb.