Edmond Rostand’s 1897 French classic Cyrano de Bergerac is adapted by playwright Martin Crimp for a new, rap-fuelled production at the Playhouse Theatre, directed by Jamie Lloyd. Scottish star James McAvoy (X-Men, His Dark Materials) returns from his adventures in the north to play the titular character – a soldier and poet with a comically large nose – bringing masterful lyricism, hints of vulnerability and, fittingly, panache to the role.

The production is the first in a new West End season from the Jamie Lloyd Theatre Company, whose previous successes include Betrayal starring Tom Hiddleston, The Homecoming and The Maids. The story follows Cyrano de Bergerac, ‘The man with the nose / And the acres of high-brow wet-dream prose’, who is in love with his distant cousin, the beautiful and intelligent Roxane. While de Bergerac’s weapon – his words – are a tour de force fit to see him defeat each of his fellow poets-cum-rappers in battle, his comically large nose renders him too unattractive to win Roxane’s affections. 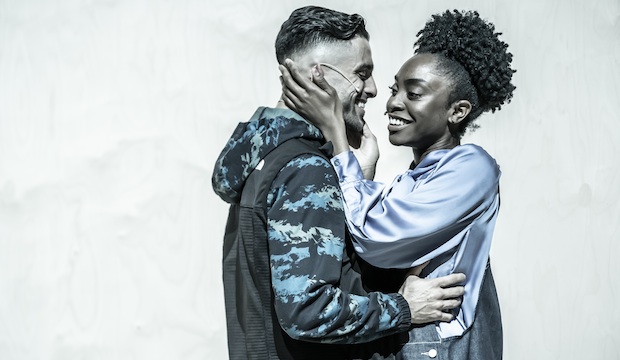 She has her eye on the handsome but near illiterate Christian, anyway, who loves her too. So Cyrano forsakes his own happiness, crafting eloquent letters and speeches to help Christian win Roxane's heart. But will being the man behind the pen ever be enough for the story’s hero?

The play opens in a French theatre in the year 1640, we’re told. But as the curtain rises on a cast dressed in contemporary clothing and led by female beatboxer Vaneeka Dadhria, Lloyd’s production instantly feels modern. Similarly, while much of Crimp’s script stays true to Rostand’s original rhyming couplet form, with references to cultural appropriation and Roxane (a cool Anita-Joy Uwajeh) sighing angrily over being subjected to the male gaze, the show feels distinctly contemporary. 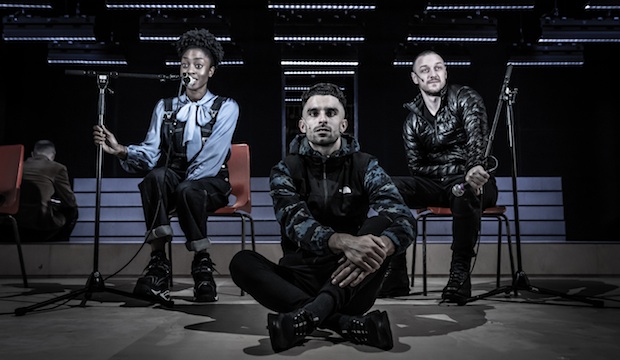 Lloyd’s production consistently breaks the fourth wall, with characters addressing their lines to us, the audience, rather than the recipient of their words. It works, particularly in the context of Roxane and Christian’s letter-led relationship, and makes the wordy script accessible and enthralling for school groups and seasoned West End-goers alike.

McAvoy will be the draw for many to come and see this revival of a 120-year-old French play, and they won’t be disappointed. He’s adept at shrugging personas on and off, and plays the entertainer with, well, serious 'panache'. (It was Rostand’s play, after all, that introduced the word to the English language.)

In a break from tradition, Lloyd’s production does not see McAvoy fitted with a mask or prosthetic nose. Instead, it’s on the audience to suspend their disbelief and imagine the colossal conk is there. Is this enough to have us believe McAvoy’s de Bergerac is unattractive? Not on appearance alone. However, through his performance, which swings from controlling the stage with witty lyricisms, to momentary teary-eyed vulnerability when talking to pastry chef Leila (a compelling and commanding Michele Austin), we sure as hell believe in his underlying lack of self-confidence. 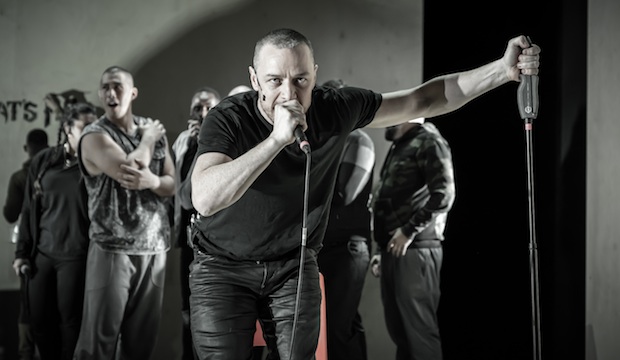 Under the careful direction of Lloyd (and supervision of fight movement specialist Kate Waters), de Bergerac’s secondary love of duelling is cleverly tied into his talent for poetry; his rap battles are enacted as physical duels that are spectacular to watch in all their drama.

Ultimately, Cyrano de Bergerac is a play about wooing and wounding with words. In the hands of the Jamie Lloyd Theatre Company, this brilliantly lyrical, quick-witted play feels refreshingly modern and fit to entertain new audiences. So: To Cyrano de Bergerac you should go / And prepare to see McAvoy steal the show. (Sorry.)

Tickets for Cyrano de Bergerac at the Playhouse Theatre are now on sale. Click here to book.