Hotshot American writer Annie Baker returns to the National Theatre with The Antipodes, a new play about stories

On the surface, The Antipodes follows a group of ‘creatives’ tasked with making up a story about something monstrous. To get their creative juices flowing, the group’s worshipped-but-incompetent leader Sandy (an authentic Conleth Hill) has them tell extremely personal stories – from the experience of losing their virginity to their biggest regret – the intimate details of which jar with the corporate, conference-room setting. This is just the beginning, though, and as the project wears on and Sandy’s faith wears thin, matters take a surreal and ritualistic turn as the uninspired group scrabble to find the story they should be telling. 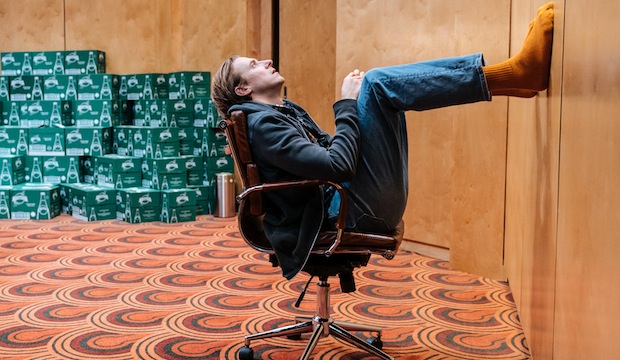 Arthur Darvill as Dave in The Antipodes. Credit: Manual Harlan

As with Baker’s other works, the plot of The Antipodes really is just the surface, beneath which so much more is going on. For starters, there’s the mockery of an office culture riddled with contradictions, protocols and empty jargon. Fittingly for a play named after the ‘antipode’ – a point on the earth that's opposite another – the play sees Sandy give his team a set of rules then do the opposite himself: no phones are allowed in the boardroom, yet he’s consistently texting; the office is a safe space where workers are encouraged to be honest and transparent, yet on opening up, one is ousted; and the only two women in the office are either ogled, patronised or professionally jeopardised by having their ideas stolen.

The team are encouraged to order extravagant lunches every day and are promised they’ll never work past 7pm, but they eventually spend the night in the office – compensated only with another takeaway for dinner.

The Antipodes is playful in theatrical form. Under the direction of Baker herself, together with set and costume designer Chloe Lamford, time sublty jumps forward each time office manager Sarah (a captivating and nuanced Imogen Doel) appears in a new outfit, or Eleanor (a relatable Sinéad Matthews) unravels her knitting, revealing its new length. When the notion that time might actually move in different dimensions is called into question, Sarah enters the room at an eerily slower speed to the conversation taking place around her. 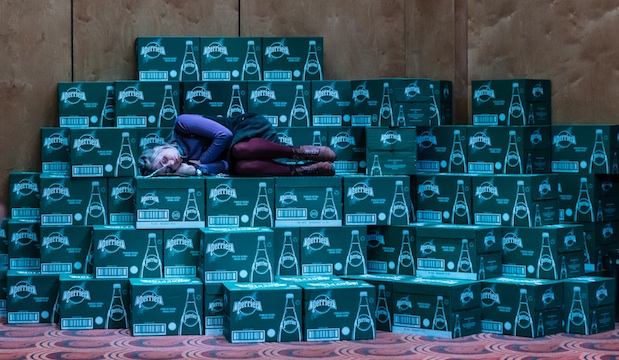 Sinéad Matthews as Eleanor in The Antipodes. Photo: Manual Harlan

Baker’s characteristically naturalistic script is occasionally played with too, most memorably when Sandy gives a lengthy description of an inspirational colleague, repeating the same clause followed by different airy power words. It’s cryptic, teasing our lazy way of talking about others.

Unsurprisingly in a play about stories, storytelling itself is also thoroughly examined: from the characters professing how many types of stories there are, to telling their own banal or absurd tales.

All this unravels on a stage dressed up as a generic boardroom by Lamford, who conjured an uncannily chintz guesthouse for Annie Baker's last National Theatre play, John. Here, an intimidating glass table is the focus of the carpeted stage, over which a bright, cylindrical light hangs oppressively low. 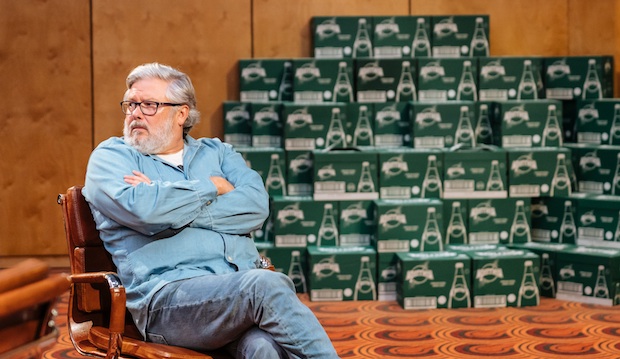 Conleth Hill as Sandy in The Antipodes. Photo: Manual Harlan

Baker knows how to test her audience’s patience. (The long drawn-out pauses in The Flick prompted a few walk-outs.) In The Antipodes, the lack of interval in the two-hour show has the powerful effect of making us feel as if we’re trapped in the boardroom with Sandy’s team of hopeful storytellers.

Thankfully, their long-winded and often philosophical anecdotes are gripping, sometimes wittily diluted with cringeworthy office-isms, such as making the room agree to a ‘cone of silence’ before someone saying something personal or vacuously reminding each other how lucky they are to be in their jobs. Each character is given their own crescendo, cleverly allowing us to glimpse the experience through their eyes.

The Antipodes questions what value stories have for a world in crisis and we leave having heard a full story – a real one though, devoid of dragons, murders and death-defying adventures. Instead, Baker presents us with another compelling narrative, both blackly comic and anthropological in its examination of teamwork in a contemporary corporate environment.