Set in a deserted village that has been largely forgotten since boundaries were redrawn, the play follows John Daniel (Rhys Ifans) and Noni (Rakie Ayola), the owners of Bear Ridge Stores: a family butchers-cum-grocery store which hasn’t seen business in a very long time. Regardless of what’s happened to the world outside, inside the store, the couple’s memories keep their former lives preserved: they dance, speak of old customers and check up on their ever-depleting stock – just a few tins – anxious should business finally appear. 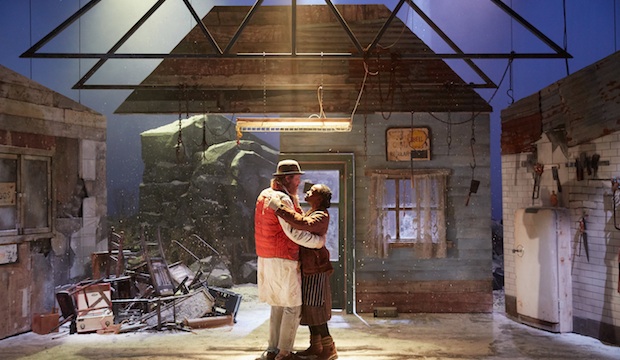 But the arrival of a visitor in the form of a bewildered Captain bursts the couple’s bubble, and soon their lightheartedly philosophical ponderings give way to outpourings of grief and fears over what’s really going on, as well as what lies in store. This irreversible disruption to their routine is simultaneously physicalised by the deconstruction of Cia Dyfan’s set, which previously walled in the action. The washed-out wooden walls and rusty kitchen appliances of the store fall away, leaving only the bare frames and rocky, snowy mountains beyond as the couple embark on the new phase of self-awareness imposed on them.

Though overwritten in parts (unsurprising when the play’s writer, Thomas, is co-directing along with the brilliant Vicky Featherstone), the script of On Bear Ridge is joyfully lyrical, peppered with fast and fun-to-listen-to duologues between John Daniel and wife Noni.

Welsh star Ifans, who is known for films including Notting Hill and the Harry Potter series, brings to the production astute comic timing. Dressed in John Daniel’s bloodied butcher's apron, he struts and frets on the stage, bellowing and dramatically rolling his Rs, all of which is juxtaposed against the subdued mannerisms of his fellow characters (more on this below). It’s very much Ifans’ show and it’s in the hands of his performance, which swings wildly between melancholic musings and melodramatic deluges, that On Bear Ridge is cemented in the tragicomic genre. 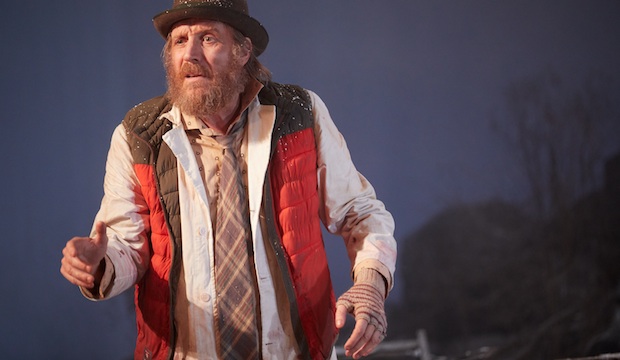 Ifans’ explosive outpourings are contrasted with Ayola’s reasoned composure in the role of Noni, and the two complement each other beautifully, bouncing and rolling the contradictory script between them. For every time Ifans takes the emotions on stage to dizzying heights, Ayola renews the calm between them. The pair are supported by Sion Daniel Young in the role of the young slaughterman Ifan William and Jason Hughes as the lost Captain, both of whom come into their own when delivering their wordy, anguished monologues.

Lots about On Bear Ridge is poignant: the theme of memories being preserved once a culture – or language – is publicly stamped out; nostalgia for the past; and the danger of independent shops going out of business due to the rise of mass corporations and high-functioning robots. 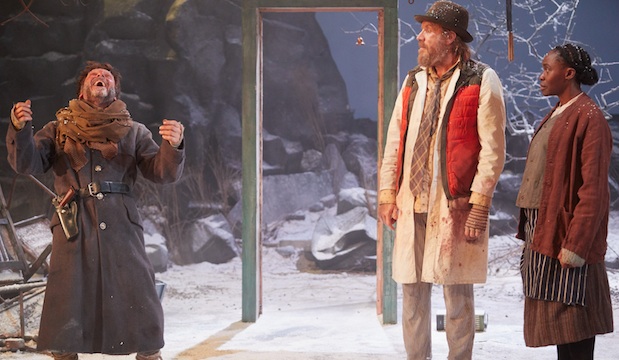 This makes it all the more frustrating that all serious worldly issues raised in On Bear Ridge and all potentially powerful speeches delivered on these issues are countered with juxtaposing jokes and spouts of silliness. Sure, this feeds the surreal nature of the play but renders it eerily void of emotion and, for many viewers, snobbishly inaccessible in parts.

Yes, there are moments when this technique works a treat: the miming of tea being poured from real crockery while war planes fly overhead is uncanny and bettered still by Ifans’ aforementioned comic timing. But while some will leave with a real appreciation of the bizarreness of On Bear Ridge as a packaged piece, others will find it alienating and tedious.