15 CW readers are interested
Socially Distanced: Lungs, Old Vic Theatre Socially Distanced: Lungs, Old Vic Theatre James Fraser
Live theatre returns to London with The Old Vic's 'in Camera' initiative. After glowing reviews in 2019, Claire Foy and Matt Smith reprise their starring roles for a socially distanced revival of Lungs. The two-person play will be performed in the empty theatre and available to stream for up to 1,000 audiences members an evening - reflecting the physical capacity of the auditorium.

Tickets to watch online are £10-65, the same price as standard Old Vic performances, and all 'seats' will offer a front-row view of the stage.

In a statement announcing the 'in Camera' series, The Old Vic said: 'Rekindling live performance in this irrepressible 202-year-old venue, albeit with minimal staging and accessible only via camera and live stream, is a genuine thrill for us. But this series is both an exciting creative experiment and also crucial in igniting the box office now all our usual channels of revenue have been entirely wiped out and we fight to preserve this beloved theatre for our audiences, surrounding schools and communities, staff, crew, and the myriad of writers, performers and creatives that work with us.'

After the first batch of tickets quickly sold out, two extra dates have been added. Tickets for performances at 8pm on 1 and 2 July will go on from 12 noon on Tuesday 16 June.

It’s this tiny thing that triggers some mega soul-searching in Duncan Macmillan’s 2011 play Lungs. Because a baby is a big deal: a huge responsibility; a life-long tie for the two parents – and 10,000 tonnes of CO2.

These debates over the emotional and environmental impact of procreation feel zingy and zeitgeisty in a starry revival of Lungs at the Old Vic. In the eight years since the show premiered at Sheffield’s Crucible Studio Theatre, the conversation around climate change is much louder. As such, the two-person play feels less original, more obvious. But that makes it more relatable – at least to 20-/30-something liberals who do their best to recycle, get in anxiety spirals over alarming headlines and like to buy their flat whites from independent cafés. (Millennial theatre-goers, prepare to feel very seen…). 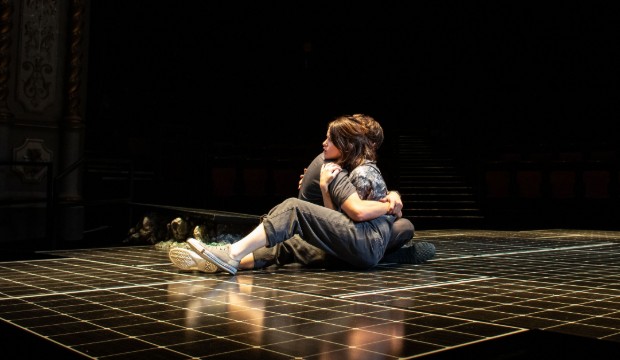 Claire Foy and Matt Smith star as a couple caught in a quandary about their future. After playing the Queen and Prince Philip in hit Netflix series The Crown, they have swapped Buckingham Palace for the Ikea checkout queue. And instead of clipped vowels and crown jewels, they give us breathless quarrels and grey trainers.

The stark in-the-round staging and simplicity of Matthew Warchus's production denies any distractions: all we have is conversation and physical movement to denote distance, passion and the passage of time.

Claire Foy is magnificent as a thoughtful PhD student who is at once certain that her purpose is motherhood, yet troubled by the implications of child-rearing. Her worries and contradictory desires unfurl at top speed, in breathless monologues and incandescent confessions. Following the free-flowing speech leaves you reeling, yet Foy is just as powerful when silent, sitting listless and lonely. 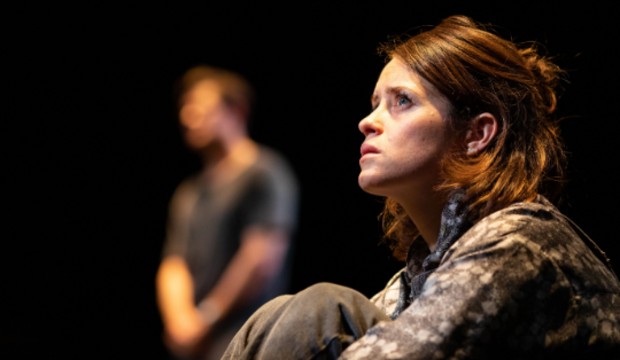 Matt Smith gives a nuanced performance as the sarky but well-intentioned boyfriend, but for much of the one-hour-and-20-minute play he is eclipsed by Foy’s intensity.

For all its angsty discussions, Macmillan’s text is sharply funny and satisfyingly dramatic. We splutter at the candid appraisal of leery love-making and we gasp with genuine outrage at a salacious confession. It’s the details that make the story so distinctly recognisable, rooted in a particular class and generation.

But the framework and the gut-wrenching plot developments transcend time to explore the complicated reasons two people end up together, the hopes and fears that root each family, and the sacrifices and selfishness that shape each new human being.