Shifting the story from 1900 Russia to 1967 Nigeria, Ellams explores frustration and tragedy against a backdrop of the impending Biafran War. Instead of Olga, Masha and Irina, we have Lolo (Sarah Niles), Nne Chukwu (Natalie Simpson) and Udo (Racheal Ofori), all brought to life with shining performances. The well-educated sisters are living in a grand house in the countryside to re-connect with their Igbo heritage, mourning the death of their father and longing to return to city life in Lagos.

So many productions of Three Sisters feel vague and listless, but Ellams instils the show with guts and specificity. From the sound effects and the stunningly detailed set to the sumptuous 60s costumes, we feel fully immersed in Nigeria. 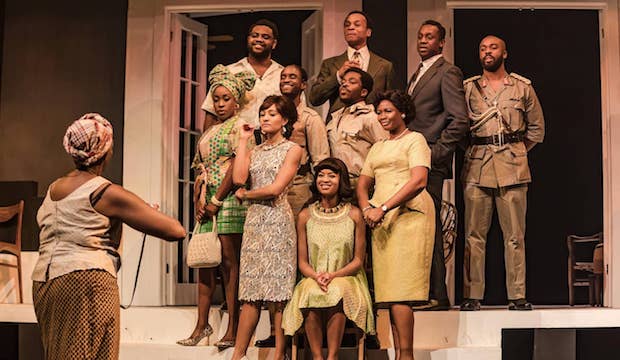 First it’s all playful humour as the spirited youngest sister Udo celebrates her birthday and announces her intention to live with purpose. But the declaration of the republic of Biafra triggers hope, violence and chaos. If you’re not well versed on the historical details of the coups, it’s worth buying a programme and reading up as Nadia Fall’s fast-paced, talk-heavy production doesn’t leave much space for explanations.

The ambitious scale of this adaptation, which squeezes tribal philosophy, colonialism, cutural diaspora and plenty of politics into a Chekhovian template, is impressive, but overwhelming. The vibrance of the performances and sparky language are let down by a structure that’s over-stretched by trying to echo Chekhov and include the full weight of the Biafran conflict.

Although there is so much heart and humour and sadness, the play makes for a dense and long three hours. But there’s enough insight, warmth and originality to make this Three Sisters memorable.