It cemented Baker's reputation as one of America's hottest new talents with a gift for capturing the ordinary cadences of conversation. But for every exhilarated fan and five star review, there was an exasperated critic or bored audience member leaving at the interval.

It’s a shabby Massachusetts movie theatre and we are the screen. For whole chunks of the play we watch the blinding flicker of a projection machine at the top of a dark, empty stage. 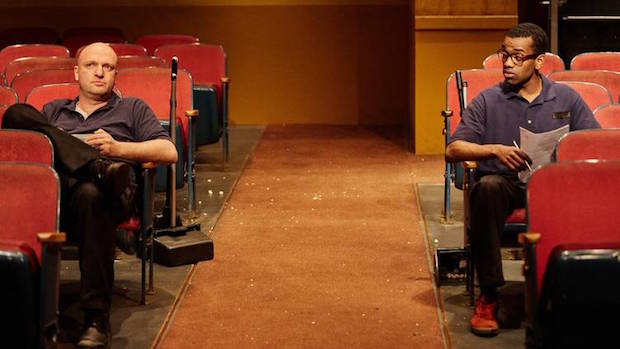 Matthew Maher as Sam and Jaygann Ayeh as Avery; photo by Mark Douet

The protracted silences make Pinter’s pauses feel like merely stopping for breath. It’s funny in the uncomfortable, idiosyncratic the way that any such social situation would be if scrutinised on stage. There’s nothing performative. We hear just half of a phone conversation for a full scene. Unless you're a film buff, copious nerdy references are hard to follow.

The Flick is a slow three hours and 15 minutes. It’s clear why people might leave. But we would urge them not to. It is this remarkable, unaffected sense of reality that sucks you in. Instead of stimulating the audience, director Sam Gold mimics the lethargy of long, listless days of menial work.

The pace is unlike anything we have seen before. But as you adjust to the disjuncture, the quotidian interactions reveal a microcosm of near hysterical comedy, emotional intensity and moral debate. The daily dramas and shifting dynamics between the three cinema employees have the intensity of any Shakespearean epic, with unrequited love, desperation, power struggles and betrayal — all related through the filter of recognisable life.

The profundity is striking; you leave with a different perspective on disconnected passers-by and half-noticed interactions. But it’s the constant, wry self-awareness in Baker’s narrative that makes this deliberately flat, dull production shimmer with life. Countless writers jostle to be the voice of their generation, a mouthpiece for millennials. Annie Baker, in this extraordinary, ordinary play is the worthiest contender we've seen on stage for while.