After a stunning opening in Galway, Grief is the Thing with Feathers transfers to the Barbican with Cillian Murphy playing a man in mourning

Culture Whisper travelled to Galway especially to see Cillian Murphy in Grief is the Thing with Feathers. London theatre fans will be delighted to learn the show will transfer to the Barbican – and that it was well worth our long journey.

It’s an absorbing drama based on Max Porter’s 2015 novel telling the strange, searing story of a Ted Hughes scholar negotiating the loss of his wife and the challenges of bringing up two motherless children. Porter writes with tenderness and blistering originality, drawing you into the inner world of grief and recovery. With piquant touches of poetry and surreal imagery, it’s not a simple novel to adapt. 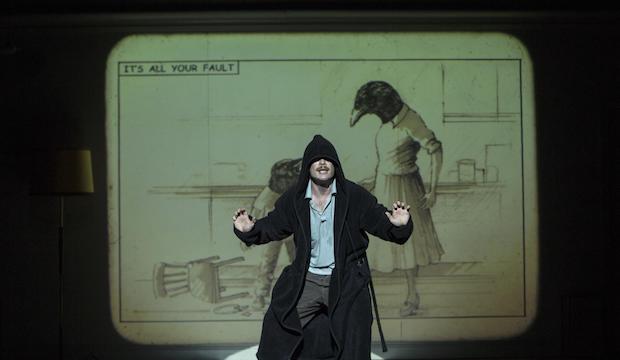 But Enda Walsh’s stage version of Grief is a Thing with Feathers translates Porter’s prose with flair and intensity. The production maintains the intimacy and insularity of the narrative, while celebrating the theatricality with disorientating moments of animation and projections.

The Disco Pigs and Ballyturk playwright reunites with longtime collaborator turned global star Cillian Murphy, who gave a rousing performance in Galway and reprises the role for the transfer.

He brings a quicksilver, often otherworldly quality to the role of widower, slipping from paternal devotion to animalistic desperation. Through Murphy’s mercurial performance, the grieving father and the tricksy Crow that slips into the flat at night and looms large over the children are reconciled in a profound metaphor for sadness, sentimentality and strength.

Since playing Tommy Shelby in BBC hit Peaky Blinders, Murphy has become a household name – and his majesty on stage is well-established after starring roles in Ballyturk and Disco Pigs – so demand will be high for this show nine-show Barbican run.

After playing the Barbican, Grief is the Thing with Feathers will transfer to St Ann’s Warehouse in New York.