Playwright Bryony Kimmings rises from the ashes in a playful, potent exploration of trauma and recovery. I'm a Phoenix, Bitch returns after impressing in 2018

In the space of seventy mesmerising minutes we see her crash, burn, drown and transform into a body

building, mind-bending, warrior of a woman.

The cult-like fans of Kimmings’ performance art know her work inside out, but for the benefit of newcomers, Kimmings introduces herself as an ‘Autobiographical Performance Artist’, giving a choreographed rundown of her solo shows, including 'The one with the pubic moustache'. She emphasises that in each show there have been tears, tears and more tears, so prepare for the waterworks in this one. She delivers on her promise.

The show retraces, rewinds and refines Kimmings’ postnatal breakdown, her crumbling relationship and the ever-worsening illness of her infant son. Although it sounds bleak, Kimmings and her co-director Kirsty Housley have crafted a light and kaleidoscopic piece that utilises film, projection, soundscapes and music. These dramatic tools sculpt a powerful, humorous and moving portrayal of a modern day woman and the ever-increasing struggles she faces on a daily basis. 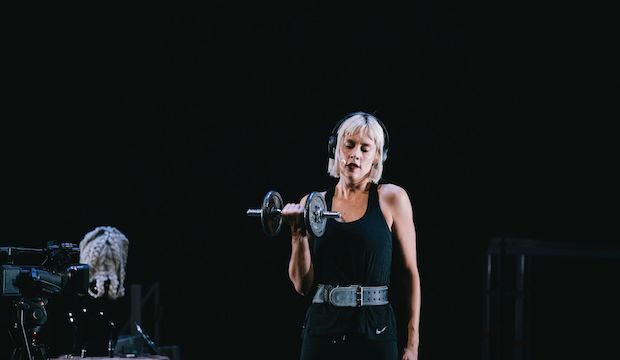 The piece as a whole is consistently playful in content and design. Art director David Curtis-Ring and Projection Designer Will Duke construct an ever-evolving stage space, playing with scale and depth in the magnificently refurbished BAC Grand Hall. A thatched cottage, the ‘site of [her] trauma’ morphs from the size of a doll’s house to a gigantic set piece at the show’s climax. Collapsible sets illustrate the fearful and fraught subdivisions of Kimmings’ mind. From a 1950s kitchen set where she makes greasy fry-ups to ensconce her lover, spraying everything around him with the perfume of a vagina, to a 1920s silent film set where she desperately cries to be saved from an unknown terror looming at her cottage door.

Intergenerational perspectives on the hardship of motherhood reverberate against the Grand Hall’s walls. Recordings of her mother’s own trauma (when Kimmings’ father abandoned them) are pumped out of massive amps on stage. These are juxtaposed against voice memos that Kimmings continuously records to her son for the future, advising him on lessons in life, the ones she has learnt through brutal experience.

Kimmings’ life story is heart breaking yet uplifting, rising to an emotional peak. As she relives her recent trauma night after night, there is a genuine concern that she may be causing herself further emotional harm. However that 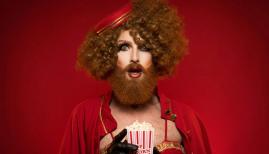 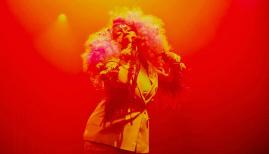 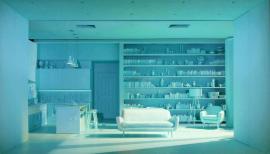