Shorn in half, stuffed with poptastic songs, and relocated to a vibey Notting Hill Carnival: Kwame Kwei-Armarh's Twelfth Night is a bombastic take on Shakespeare

New artistic director Kwame Kwei-Armah starts his tenure with a joyous blast of theatricality, and a fresh, intersectional take on Elizabethan drama.

Shorn in half, stuffed with poptastic songs, and relocated to a vibey candy-coloured street, this production is a bombastic take on Shakespeare’s crossdressing comedy. It arrives at the Young Vic after already impressing at NYC’s The Public Theater.

Using the original blank verse, though in much shorter snippets, it carves a modern rom-com out of the story of unrequited love and mistaken identity. Shaina Taub’s music re-frames phrases and themes from the text into a songbook of contemporary soulful songs, which make The Bard sound more like Beyonce. At first the shifts between Americanised singing and British speech feel jarring, but you soon get into the swing.

If, as the first line of the play purports, music is the food of love, then this Twelfth Night is especially satiated and loved up. From the jubilant opening number, where cast and community chorus fill the whole theatre with colour, you can’t help but get carried along with the whirligig.

Instead of the courts of the duke and countess, Illyria is a street party that bursts out into the audience and brings 30-40 Lambeth locals onto the stage as chorus. Multi-coloured houses recall Notting Hill and the rainbow of different flags framing the stage add to the Carnival atmosphere.

Amid all the dancing and sparkle, Viola (Gabrielle Brooks) has washed up feeling desolate over the loss of her twin. She decides that donning a male disguise will provide ‘a bastion of security til Sebastian is returned to me’. With Brooks’s honeyed vocals and keen comic timing, it’s easy to root for Viola/Cesario. Her anthem about disguise and suddenly feeling ‘so seen as a guy’ is a highlight, filtering far-fetched impersonation into an astute exploration of gender bias. 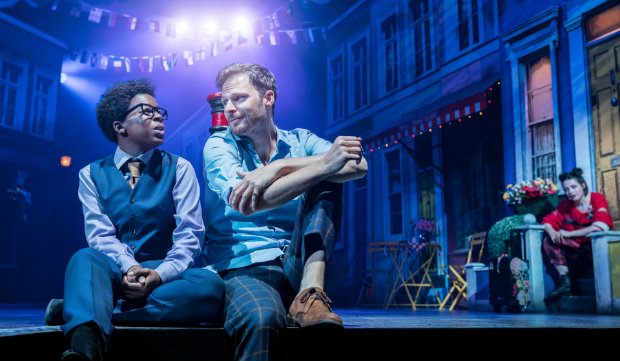 Gabrille Brooks as Cesario and Rupert Young as Duke Orsino in Twelfth Night at the Young Vic. Photo by Johan Persson

This message of inclusivity, empowerment and empathy shapes the whole production, which prioritises the comedy and romance over the irresolution that usually undercuts Twelfth Night.

There’s a Richard Curtis cutesiness to the flourishing, mis-directed and unrequited love triangle between servant, master and mistress. And the boozy brawls of Sir Toby Belch and Sir Andrew Aguecheek translate seamlessly into an uproarious drinking song, 'You Are The Worst'. There are proper bellylaughs, not just a few smug titters from those who can follow Elizabethan wordplay.

The biggest guffaws come courtesy of Malvolio (Gerard Carey). With a haughty pomposity and a penchant for zooming in on a segway he is a source of ridicule. When a dissembling plan tricks him into thinking he has a chance with the Countess, Malvolio’s fantasy of becoming Great becomes an exaggerated, tap-dancing Vaudeville number. The cruel treatment and uncomfortable slide to madness is sidelined in favour of pantomime gags as he parades round in yellow lycra.

It’s all great fun to watch, but this is where you can understand purists’ niggles about 'dumbing down' Shakespeare’s bittersweet complexity.

Yet, this production is revelatory in its own right. Shakespeare didn’t write for scholars or snobs; his plays were popular entertainment for anyone who could muster a groundlings ticket. This show captures that spirit with gusto.

It’s a delicious reminder that theatre can and should be fun for everyone.