Social activist theatre at its best: after an impressive Young Vic premiere, The Jungle transfers to the West End

5 CW readers are interested
The Jungle, Playhouse Theatre 4 The Jungle, Playhouse Theatre Emma Christie
Playwrights Joe Murphy and Joe Robertson founded Good Chance Theatre. which creates temporary theatrical spaces in transitory spaces to help build sites of hope and expression. The Jungle is a momentous and moving co-production from the Young Vic, the National Theatre and Good Chance Theatre: it takes the audience into what has become known as the ‘Jungle’, the refugee and migrant camp in Calais in use from January 2015 to October 2016.

After an impressive premiere at the Young Vic in December 2017, The Jungle transfer to the West End.

The 450-seat Playhouse Theatre will be transformed to accomodate Miriam Buether's innovative set design, which was divided into different country regions of the camp, including Iran, Palestine, and Eritrea. In Murphy and Robertson’s forceful, poignant and powerful play, the ‘Jungle’ (or ‘Zhangal’ as originally named) becomes a space of hope, belonging, and fellowship. 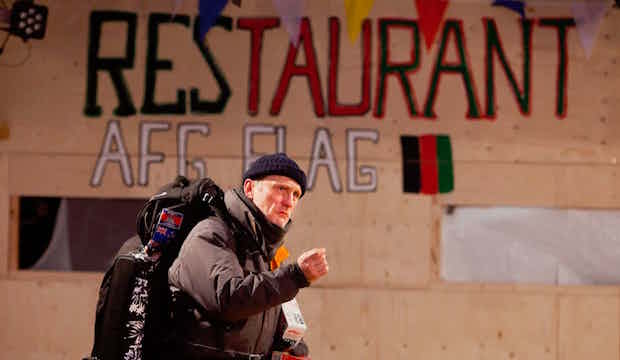 Told through the voice of Safi (Ammar Haj Ahmad), a Syrian refugee from Aleppo and student of English literature and languages, The Jungle navigates the transition and transformations the camp undergoes, from being a transitory space to a permanent home for many. All of the action takes place in an Afghan restaurant, run by Salar (Ben Turner), that becomes the headquarters for decision-making and community-building.

Designer Miriam Buether has the audience sit on long tables or cushions, creating an immensely evocative and intimate space. Murphy and Robertson astutely portray the knottiness and tensions that occur between nationalities as well as the deep and evolving affections between characters. It does its best to reflect all shades of life in the ‘Jungle’, including hope, joy, sorrow, and anger.

Particularly, the writers are smart to represent both positive and negative aspects of intervention from British volunteers. Characters such as Sam (Alex Lawther), a posh boy with an initial desire to document the crisis, and Beth (Rachel Redford), a young woman in her gap year seeking a sense of purpose, are additions to the community that both help and harm the characters seeking asylum in the UK.

The cast, some of whom made their UK theatrical debut in the Young Vic , were quite remarkable in shifting between anguish, trauma, hope, and perseverance, sometimes even displaying all at once.

Profound and important, The Jungle may not tell us anything drastically new about the refugee crisis, but what it seeks to do is bring the reality of the crisis in all its complexity closer to home. Quite crucially, a video from Help Refugees extends the impact and devastation of what occurs onstage into the real world. Safi reminds us that the crisis still continues, and urgency of action is as pressing as before.

Tickets for the West End transfer of The Jungle go on sale at 10am on Wednesday 14 March.