Brief Encounter regularly finds its way to the top of lists of the best British films of all time. The 1945 classic is a devastatingly restrained portrait of mid-life extramarital romance. Adapted from a one-act play by Noël Coward, it tells the story of Laura and Alec, thrown together by a chance meeting in a railway café in 1938. Neither is unhappily married, but from this encounter develops a passionate affair, never fulfilled, thwarted by guilt and circumstance.

Rice’s musical adaptation takes things full circle: back to the stage but with grainy, cinematic projection cleverly woven throughout the action. Characters step through screens and onto black and white film as the production oozes vintage charm. The staging is fabulous, and makes great use of the limited space provided by the cinema setting. Curtains ripple as trains rush past, and characters race across the raised bridge to the far platform. Classic Noël Coward songs, with a few musical updates by composer Stu Barker, break up the action. Isabel Pollen and Jim Sturgeon deliver wonderfully understated turns as Laura and Alec, believably torn below simmering passion, despite some of the more overtly theatrical tricks employed by Rice.

This multimedia mash-up also makes much more of the supporting cast, interspersing comic interludes and Noël Coward ditties between the heart-wrenching scenes of repressed romance. It throws more focus on two other potential affairs bubbling up among the quirky staff members of Milford Junction railway station. These almost music hall-esque interludes won’t be everyone’s cup of (milky) tea, especially fans of the film’s quiet restraint, but the performances are superb and Coward’s lyrics used to great effect. Jos Slovick, guitar and ukulele in hand, is utterly charming and carries much of the musical side of things. And Dean Nolan brings a remarkable physicality to the sympathetic station master Albert Godby.

Don’t worry though, Rachmaninoff’s sumptuous 2nd piano concerto in C minor, in which Laura so memorably loses herself on screen, still roars loudly throughout. As it reaches its crescendo it’s hard to feel anything but hopelessly drawn in. Kneehigh’s Brief Encounter is a very different beast to the film. It’s a jack of all trades: comedy, musical, romance and tragedy. It’s an odd mix but it works, and it’s utterly delightful. 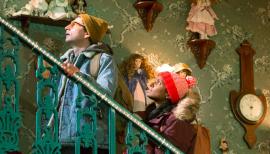 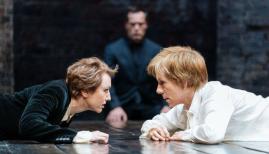