David Suchet and Brendan Coyle shine in Arthur Miller’s The Price, as Wyndham’s Theatre make the best of a piece that lacks a punch

2 CW readers are interested
The Price, Wyndham's Theatre review 3 The Price, Wyndham's Theatre review Lucy Brooks
The Price is not one of Arthur Miller’s well-known plays, and perhaps this is understandable. Although Miller provides sophisticated characterisation, powerful dialogue and well-developed themes, The Price lacks the force of All My Sons or the pace of Death of a Salesman (both of which will be revived in London this year).

This production sees David Suchet (Poirot) and Brendan Coyle (the ever-honourable Mr. Bates of Downton Abbey) transfer to the West End after a successful 2018 run in Bath.

The action takes place in the attic of the New York apartment of Victor Franz (Coyle) and his estranged brother Walter (Adrian Lukis). The brothers are reunited to sell their father’s furniture to Gregory Solomon (Suchet), a Jewish dealer whose mannerisms are so larger-than-life they border on stereotype.

Despite an insightful exploration of the importance of the past – hovering ominously over the characters in a wave of antique bric-à-brac – The Price feels slow, almost aimless. The script is driven by a threadbare plot: ‘how much for the furniture?’ 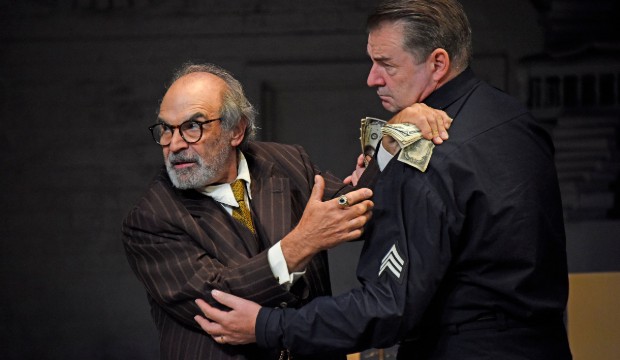 David Suchet and Brendan Coyle in The Price. Photo by Nobby Clark

Strong performances are the pillars upon which this show stands. Suchet’s tragicomic Solomon is a hilarious show-stealer. Unashamedly over the top, Suchet puts on a thick Yiddish accent and revels in dry humour, melodramatically casting hands and eyes heavenward as prices are raised higher.

Watching Suchet bring the house down with an act as simple as solemnly eating a hardboiled egg, is to know you are in the presence of a comic genius. Yet moments of sad introspection allow him to layer the octogenarian, demonstrating there is more to Solomon than mere comic relief.

Coyle holds his own as Suchet’s sparring partner. The earthy, straight-talking policeman is a fitting foil for zany Solomon. They seem to be at odds. But he is easily won over by Solomon’s ridiculous re-enactment of his days as an acrobat, shaking with laughter so truthful we half-believe Coyle has corpsed.

It’s a shame Solomon is mainly confined to the first act. An unexplained seizure seems a desperate attempt by Miller to make such a big character leave the room. This frees the brothers to descend into exhausting cycles of revelation, accusation and reminiscence.

Although Lukis and Coyle pull out all the stops with this, little is really resolved or changed. They are ultimately arguing over a family drama that ended long before the play started. Their shocking accounts of the major events of this drama, a consequence of the Great Depression, makes us yearn to watch the earthquake itself rather than the aftershocks. The Old Vic’s revival of Miller’s The American Clock may give a bigger bang for your buck.