Stars at the Old Vic: Sally Field and Jenna Coleman lead a stellar cast in Arthur Miller's All My Sons

Instead of attempting to re-frame or re-consider Miller’s 1947 smash hit, this subtle, production emphasises the intricacies of ambition, shame and loss on both a personal and political level. Herrin relies on quality rather than boldness, in a straight production that’s shaped by impressive performances.

Max Jones’s scrupulously realistic stage design transports us to a sunny backyard with wilting rose bushes, tufty grass and a large house in the background. This close up detail resonates through the drama as we watch the Keller family live out a version of the American Dream. 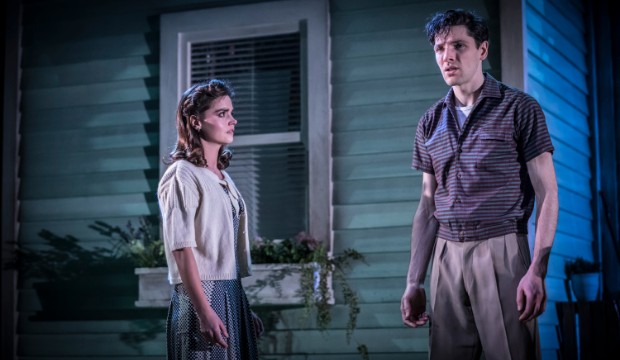 Jenna Coleman (Ann Deever) and Colin Morgan (Chris Keller) in All My Sons at The Old Vic. Photo by Johan Persson

Joe Keller (Bill Pullman) is a jovial family man who likes to jape with the local kids and play cards with his neighbours. The war brought huge profits to Joe’s manufacturing company, but still casts shadows over family life: the eldest son Larry is missing, presumed dead while his brother oscillates between survivor’s shame and uneasy idealism. Matriarch Kate is still in denial, surrounding herself with superstitions and hopes that Larry will return home.

The fragile family balance is further freighted with the return of girl-next-door Annie. She used to be Larry’s sweetheart, but now his brother Chris wants to marry her.

Bill Pullman captures the nuances of the flawed father, undercutting the nicety with an ambition that is at once brutal yet understandable. He wears his guilt with a keen sense of practicality, but we never doubt the corrosive cocktail of shame and loss.

Miller’s dramas are all about making the everyman into a tragic hero, zooming in the frailties and emtional depths of fathers and sons. But this production never loses sight of the women holding it all together.

Sally Field is superb as Kate, traumatised and trembling as she insists her son is still alive, yet steely strong as she stops at nothing to protect her family. And it’s this relationship between self-delusion and self-protection that feel most striking in a 2019 context.

While the roots of the story will always been in the specifics of America after the second world war, the exploration of shame and secrecy transcends to feel timeless.