Drawing on Hard Times, Stud Terkel's oral history, the play follows the Baum family and sets their personal struggles in the broader context of a nation in crisis. Father Moe, mother Rose and son Lee were once stock market beneficiaries, but are now desperately trying to uphold their dignity and comfortable life, while their bank balance, home and society collapses around them. The Baum family is triple cast (three actors play Moe, three actors play Rose, three actors play Lee), which is at times inspired, and at other times confusing.

A strong ensemble is headed by the elegant Clarke Peters, of TV show The Wire fame, who narrates and plays multiple roles. The diverse cast is directed with vim and vigour by Rachel Chavkin, who is well known for her direction of the genre-defying musical Hadestown, and her ambitious direction of the electro-pop opera Natasha, Pierre & the Great Comet of 1812, which ran on Broadway, and is currently on tour in Tokyo and likely to come to London.

Chavkin has integrated music into the show with the same gusto as her other work. The jaunty live jazz band soundtracks the show with highlights from the American Songbook from the 20s and 30s. Choreography by Ann Yee compliments the tunes, with lilts of lindy hop and swing dance performed admirably by the whole ensemble. A frisky tap dance and monologue merge into a stand out moment from actor Ewan Wardrop. 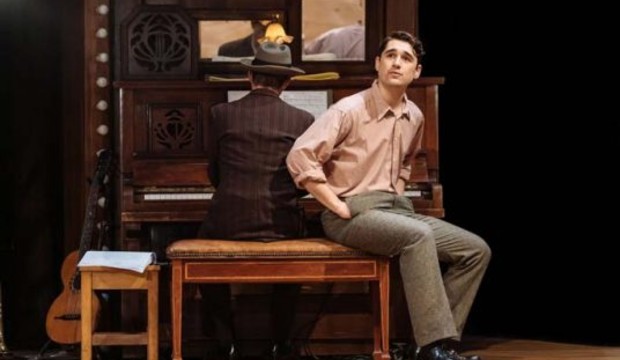 Fred Haig in The American Clock. Photo by Manuel Harlan

The American Clock is a play of ideas, not dramatic narrative, so it does not reward the audience with the emotional depth that the Depression era setting has the potential to excavate. Instead, the sheer number and scope of vignettes from extraneous characters and settings becomes muddled, particularly when actors who multi-role primary and minor characters blur without distinction.

What the writing lacks is a true human connection with the characters. This is a shame as Miller proves time and again in shows like Death of a Saleman and All My Sons that he is a master craftsman when it comes to devastating and poignant character portrayals that gut punch you, with emotional recalls chasing you for days after.

The American Clock is one of Miller’s lesser-known plays, and was written in 1980. Interestingly, the play bombed on Broadway when it was first produced, after only 12 performances and 11 previews. Since then it has been rewritten and restaged multiple times, including the Olivier award nominated production at the National Theatre in 1986.

For all its flaws, it’s a show ripe for performing at this time in the UK. The American Clock mirrors the sinister ticking of the Brexit clock, with the foreboding reminder that history repeats itself. Human delusion and ignorance doesn’t just sit between the pages of history books or plays. It is strong and stable right here, right now.