Hewitt’s direction is sharp and impactful, revealing the desperation, the strength, and the humanity found within Guirgis’s deft writing. Set mainly in Rikers prison in New York City, Jesus Hopped the ‘A’ Train is a profound examination of redemption, accountability, justice and faith.

Searing conversations between unruly Angel Cruz (Ukweli Roach), a young man charged with first degree murder for shooting an evangelist, and zealous Lucius Jenkins (Oberon K.A. Adjepong), a multi-murderer facing the death penalty, make up the meat of Guirgis’s drama. These scenes vibrate with intensity as Angel and Lucius debate the existence of God and their responsibility for their actions. Dervla Kirwan as Angel’s attorney, Mary Jane, speaks directly to the audience, coolly narrating the events and frankly admitting her stake (and mistakes) in the trial. 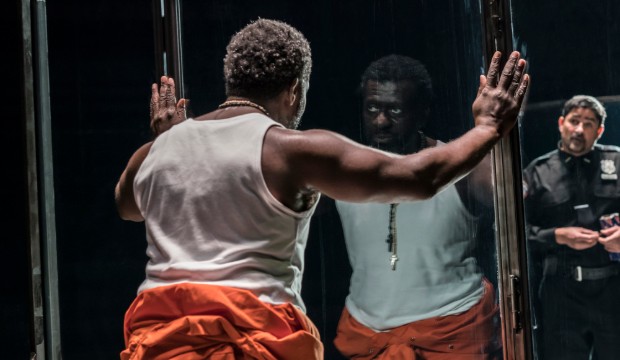 Hewitt enrolls the audience as a jury, seated on both sides of Magda Willi’s long, white stage, while glass frames expand and contract to depict the prison spaces as well the psychological effects of confinement. Sharp white light overhead illuminates the prisoners’ reflections in the glass, and evokes a real sense of self-exploration and an ever-watchful presence.

Because Guirgis masterfully imbues contradiction in each character, the verdicts of guilt/innocence and right/wrong are unsettlingly unclear. Such ambiguity is only intensified by the masterful performances of the ensemble, particularly Adjepong and Joplin Sibtain as the guard Valdez, who fully embody the anger, frustration, and convictions of their characters. Particularly thought-provoking is a monologue by Matthew Douglas as Charlie, the guard before Valdez who was fired, whose initial amicable relationship with Lucius is clouded by his final visitation.

Jesus Hopped the ‘A’ Train does not offer a clear verdict, even while it implicitly criticises the judicial and penal systems of America. More than anything, it illuminates the struggle to come to terms with one’s own existence, however flawed and contradictory it might be.