Danai Gurira is a familiar face from starring in Hollywood hit Black Panther and playing Michonne on American TV drama The Walking Dead, but she's also a force to behold in the theatre world.

She broke Broadway records in 2016 with Tony-nominated play Eclipsed, which was the first production to feature a cast and creative team comprised completely of black women. She also wrote and co-starred in (along with Lupita Nyong'o) In the Continuum, which was performed in Harare to commemorate World Aids Day.

Now Londoners can discover Gurira's writing talent as Kwame Kwei-Armah revives her 2012 play The Convert as part of his first season at the Young Vic Theatre. He describes the show as 'a modern masterpiece', which explores 'colonialism, choices and power'.

The Convert takes us to 1896 Rhodesia, where a young woman called Jekesai escapes a forced marriage by taking refuge with a Roman Catholic missionary and converting to Catholicism. Drawing on colonial history and Gurira's childhood in Zimbabwe, the play examines how religion and language shape black identity. 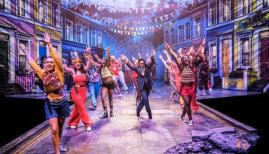