Now the National tries its hand at Molière’s masterpiece in a vibrant and contemporary version by John Donnelly with Dennis O’Hare as the lead. Boisterous and spirited with some smart adaptations, this Tartuffe has a compelling modern twist but with some less convincing moments.

Set in a glamorous home in Highgate, Tartuffe takes satirical jabs at the North London elite, screen-addicted millennials, and aspiring aristocratic artists as Orgon (Kevin Doyle) is seduced by Tartuffe’s (O’Hare) generic ‘spiritual’ teachings. Some of the jokes land more than others, with the first few quips feeling formulaic and the laughter sounding canned. But the play finds its footing later and cleverly comments on contemporary hypocrisy.

Designer Robert Jones’s set sparkles lavishly and garishly with a massive gold statue of Michelangelo’s David and a portrait of Saint Sebastian on the navy painted wall. The main room is complete with numerous hiding places that director Blanche McIntyre uses as surprise entrances and hideaways, a trope that loses its excitement as it’s rehashed. 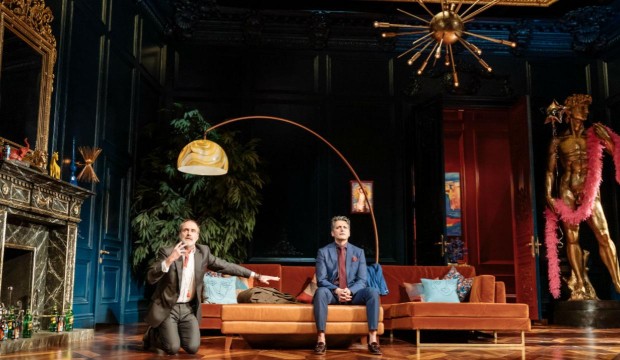 Donnelly and O’Hare subvert the conventional interpretation of Tartuffe as an obvious antagonist. While he unquestionably acts as Orgon’s spiritual guide, O’Hare’s Tartuffe buys into his teachings partially due to Orgon’s own zeal. O’Hare is physically brilliant and very funny, and in a shrewd move his Tartuffe is not the most outrageous character onstage. But his accent, an unsteady generic Eastern European is distracting at best, and lessens his otherwise fine performance.

Donnelly’s production makes it clear that in this world, hypocrisy does not start or end with Tartuffe. Orgon’s wife Ermine, played by Olivia Williams, is nicely modernised. Her trick to reveal Tartuffe’s duplicitous ways by seducing him is preempted by an astute and slick monologue about the still limited agency offered to modern women.

If anything, Doyle’s Orgon comes out the worst in this version, a self-serving official riddled with fear and desperate to return to the good old days. Ultimately Donnelly’s Tartuffe is a modern day satire not about religious pietism, but about how entrenched the layers of hypocrisy are within the larger institution of the country. 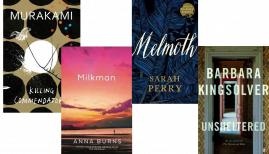