In Jamie Lloyd’s immaculate revival, the Pinterian power struggles, loaded pauses and repressed meanings feel archly of the moment. And the three accomplished actors, led by a superb Tom Hiddleston, capture every agonising and exhilarating cadence of the central love triangle.

We start at the end, with rosy glow of nostalgia as Emma (Zawe Ashton) and Jerry (Charlie Cox) meet for a drink two years since the end of their seven-year affair.

‘It’s nice sometimes to think back,’ they agree. We learn that both Emma and Jerry are married. And that Jerry is best friends with Emma’s husband, Robert (Tom Hiddleston). The emotional stakes may be high, but this reunion is repressively polite. 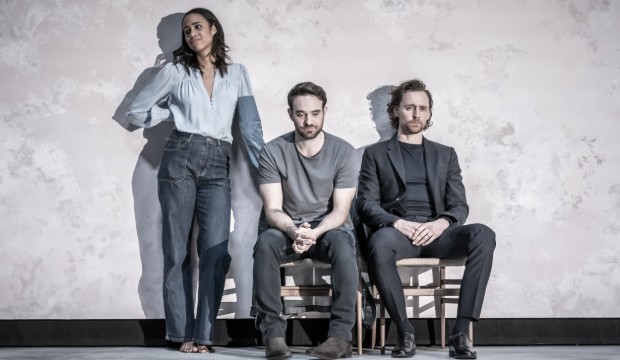 The backdrop reflects the starkness of the speech. A minimalist marble set is tinged peachy pink or flat grey depending on the lighting. Exchanges between any two characters are overlooked by the third, pacing the background. Concentric circles on the floor revolve as the phrase ‘two years earlier’ is projected on stage.

In the course of a taut 90 minutes we journey back through nine years of deceptions, discoveries and devastation. It’s a story powered by lust, seduction, sex, lies, power struggles and violence. But it plays out in frigid pleasantries.

Tom Hiddleston straddles the surface geniality and inner turmoil with finesse. Perfectly postured and long-limbed in a slim-fit suit, he’s the epitome of stiff-upper-lipped intelligentsia. Later, as the wronged husband, he sidelines the secret with silent, streaming tears. But his clipped diction has a distinct snarl when Robert suggests thrashing Jerry on the squash court, and a sickening self-assurance when he describes the urge towards domestic violence as ‘the old itch, you understand’. 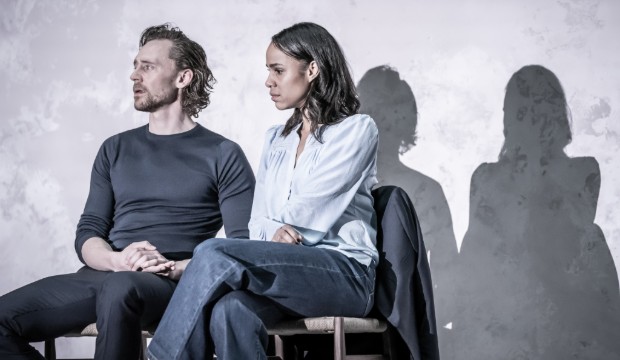 Hiddleston’s Robert is at his caustic, calculated best in the confrontation with Jerry. ‘Have you read any good books lately?’ He asks over lunch just days after discovering that his wife and supposed friend are five years deep into an affair.

Instead of a catharsis, the exchange is a pressure chamber of politeness. Hiddleston is hilarious, making blithe remarks about the state of contemporary literature as he brutally stabs at his meal and knocks back glass after glass of Calvo Blanco, while Charlie Cox’s Jerry maintains his jovial self-denial with similar gusto.

Meanings morph in the gaps of guarded small talk. The terse dialogue is characteristic of Pinter, but it’s at its funniest and most intensely human in the context of failed romance, where the true heart of the matter is always left unsaid.

Betrayal is the play where Pinter made a marked shift away from abstraction and absurdity towards a more achingly accurate depiction of the human psyche. The clarity and quality of Jamie Lloyd’s production make it feel as relevant as ever, 40 years after it premiered. And of all the different machinations of betrayal, it's the self-deception that rings the truest.

Tickets for Betrayal are now on sale. Click here to book.