Top Girls is a mercurial, formally-inventive play that begins with absurd humour and slides into biting realism. Director Lyndsey Turner, who revived Churchill’s Light Shining in Buckinghamshire at on the same stage in 2015, revels in the surreal mischief of the text with a lucid and lively production.

A projection tells us it’s Saturday night in 1981, but the opening scene is a tapestry of different eras. We watch a celebratory dinner, hosted by ‘ball-buster’ Marlene (Katherine Kingsley) to mark her promotion in the Top Girls employment agency. Her guests include Victorian traveller Isabella Bird, medieval heroine Patient Griselda and Pope Joan, who fooled the Vatican into thinking she was a man in the Middle Ages.

As wine flows the motley crew of women share their stories. Churchill’s characteristic overlapping dialogue flows with vigour, sometimes as a domineering interruption, other times in a flood of empathy. Conversation becomes increasingly confessional yet remains blackly funny: ‘Have we all got dead lovers?’ someone asks. Later they bond over accounts of traumatic births, and lost babies and children taken away.

This satire may be detached from reality, but it establishes motifs that resound through each section of the play as it grows increasingly naturalistic. 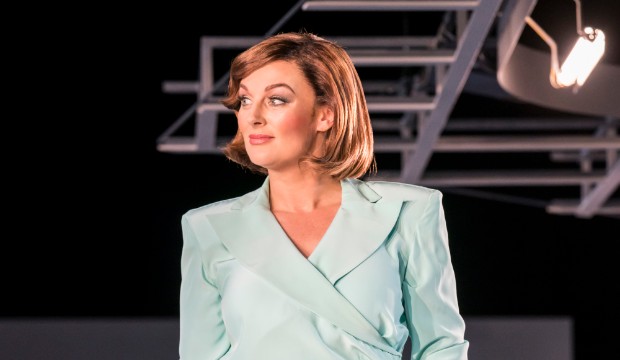 Typically in productions of Top Girls, the historical figures return in pencil skirts and stilettos as a cast of seven actors play the 16 different characters. But this revival has a new actor for each part. It doesn’t add anything - indeed there’s fun to be had in recognising fantasy figures take root in the real working world. But when so many classics offer minimal female roles, and when there’s no weak link in the vast cast, it’s hardly objectionable.

Churchchill’s tonal shifts from fantasy dinner to workplace formality then family politics are bracing, and the form and subject matter of the play still feel startling.

In the second section, a contrastingly intimate dialogue between two teen girls, a reference to menstrual blood elicits an audible gasp from the National Theatre audience. Later as Marlene plays top dog at the Top Girls office, we see a parade of shoulder-padded power-dressers on the prowl in a glossy glimpse of 1980s career women.

Finally, in a family reunion, the gulf between high-flying Marlene and the domestic drudgery of her sister Joyce (Lucy Black) reveals painful secrets, personal sacrifices and political rifts. ‘The country needs to stop whining’, so we can be ‘free in a free world’ insists Thatcherite Marlene, in an eerie echo of contemporary Brexiteers. Her sister champions the underdog, asking what will become of the ‘stupid, lazy and frightened’.

Together the sisters embody a dichotomy of ‘Us’ and ‘Them’, but they also flesh out the multifaceted compromises and constraints of being women, both personally and politically.

It’s remarkable how little has changed.