Rampage film review 2 Rampage film review Daniel Lewis
Going to see a Dwayne “The Rock” Johnson film (which could be a genre in its own right soon) is a bit like a lucky dip. You take a seat, brace yourself and hope for the best: a pleasant surprise, like last year’s Jumanji: Welcome to the Jungle. Sadly, this film sees the ex-WWE champion, and 2016’s highest-paid actor, on a bit of a downturn. Rampage is neither surprising nor entirely pleasant. 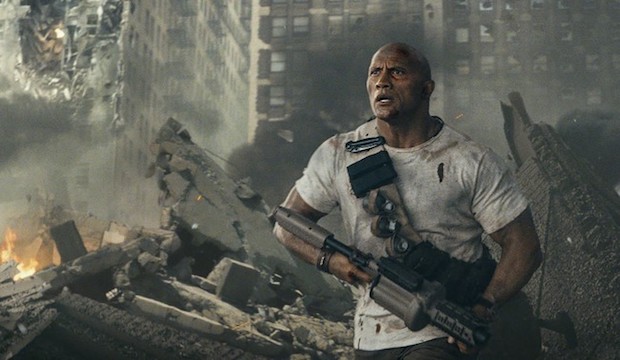 The movie is adapted from the retro video game series where players send giant monster humans to destroy cities while fending off the military and police. Rampage simply swaps the humans for a trio of mutant animals: a grey wolf, an American crocodile and a silverback gorilla, George, who has, or had, a special bond with misanthropic primatologist Davis Okoye (Johnson).

Okoye must stop the animals before they raze Chicago to the ground. He’s aided by a genetic engineer (Naomie Harris) who used to work for the Wyden siblings (Malin Åkerman and Jake Lacy) whose company’s illegal pathogen turned the gentle creatures into aggressive beasts. The evil twins are, of course, doing their best to bring their ‘research’ home.

The animals wipe out whole armies, swotting and stamping them out like helpless little insects but it’s really the actors who prove to be disposable. You feel slightly sorry for P. J. Byrne, playing one of Okoye’s students, who’s dropped after the first 20 minutes or so. We’re fairly certain we were laughing at and not with Jake Lacy who, with his comedy credentials, should know better. And it’s worrying that CGI beastie George has as wide a range of expression as The Rock. 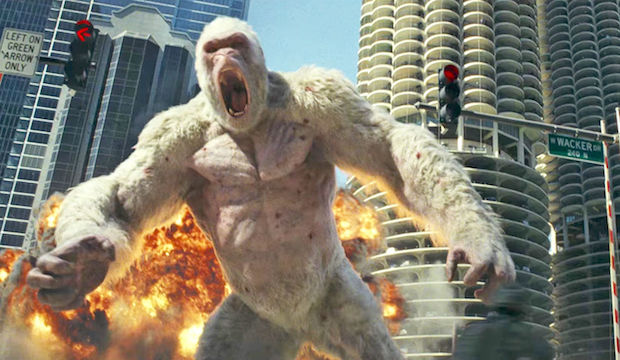 Only Jeffrey Dean Morgan (recently in CBS's The Good Wife), playing a fix-all government agent, has a little more staying power, and that only because his devil-may-care cowboy routine makes a mockery of everyone else’s earnestness (here’s looking at you, Naomie Harris).

To accompany the plot point spoon-feeding, there’s plenty of earth-shattering explosions and deafening loudness that the most well-adapted denizens of disaster movies could probably stomach. The initial death-and-destruction is quite satisfying but soon becomes overkill.

But there’s still not enough to distract from the film’s premise which is the root of all our problems here. Is it too much to ask that these disaster films, if we have to live with them, deal with real eco-terrors like, for example, the climate crisis? If they could send a crack of team of know-it-all scientists and impossibly ripped bodybuilders to solve that conundrum, it might do us all a world of good.