1 CW reader is interested
Last Flag Flying film review 2 Last Flag Flying film review Daniel Lewis
Richard Linklater was a busy man back in 2003. His cult hit family film, The School of Rock, had just come out and he was working on the upcoming release of Before Sunset – the second in his trilogy of films starring Ethan Hawke and Julie Delpy as time-constrained lovers – and surely one of the best sequels ever made.

It goes some way to explaining why Linklater wasn’t able to make Last Flag Flying, a maudlin meditation about ill-conceived American interventionism abroad, back when the Iraq War had just begun and was on everyone’s minds. 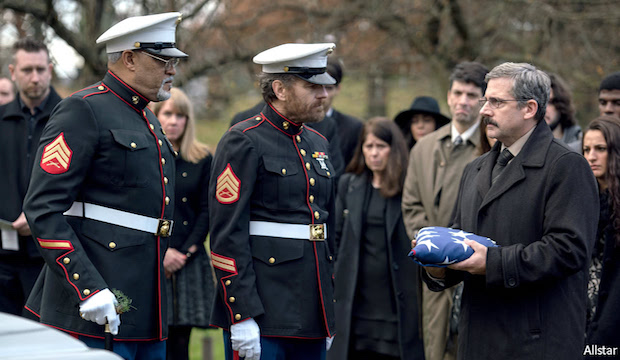 What’s less clear is why the celebrated director decided to make this film now, some 15 years too belated. Here is a feature that we can almost feel become obsolescent in front of our eyes. Not least during a ludicrously long scene in which three middle-aged men excitedly goof around on their new flip-phones and talk distrustfully about “the internet” as if it’s some kind of voodoo magic. It's laughably dated.

The three men in question are Sal (Bryan Cranston), Mueller (Laurence Fishburne) and “Doc” (Steve Carell), three Vietnam veterans who are reunited by the latter as he seeks companions with whom to go bury his son, a fallen soldier in Iraq, at the Arlington cemetery for war heroes. But when they get there, Doc realises that he doesn’t want his deceased son to be part of the US military’s propaganda agenda, and solicits his old friends to help him transport the body back to his hometown in New England.

What follows is a jarring and confused confluence of tones and genres. The tragic context of the story is constantly diluted by the road-trip/ buddy-comedy element at the heart of the narrative – the exception being one moving scene in which Carell breaks down at the sight of his son’s bullet-riddled body.

But even if this is billed as a sort of dark comedy, then it suffers from a distinct lack of humour. Most of the jokes centre around Sal, a 20-year-old stuck in a 60-year-old’s body, trying to goad Mueller, now a reverend, to drop the dignified act and become the foul-mouthed, badass soldier he knew back in Vietnam. It’s funny the first time but this dynamic quickly becomes tiresome. 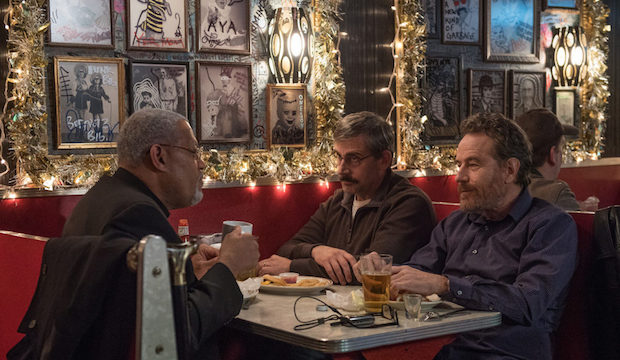 Like many films before it, Last Flag Flying endeavours to explain why it is that young men enlist to go fight in a war that will result in lifelong trauma, if not death. It emphasises the appeal of camaraderie, and the sense of personal purpose and patriotic service; it shows that even within the atrocities of bloodshed nothing is ever quite black and white.

But Linklater goes too far, bizarrely implying, even though it surely wasn’t his intention, that the friendships and memories made in the army are worth the devastation.

In fact, there’s one deeply uncomfortable moment in which the three men excitedly regale a young soldier with their tales of going to brothels in Vietnam. Anyone who’s seen Full Metal Jacket will know that what they’re essentially nostalgic for is being able to take advantage of helpless (likely underage) girls. It’s just another way in which this film feels woefully out of step with the present.