An animated 'love letter to Mexico' by Pixar: Coco is the cutest thing we've seen in a while

3 CW readers are interested
Coco film review 4 Coco film review Lucy Brooks
Pixar has been in the throes of an identity crisis, as indicated by an overabundance of sequels. But after a steady stream of Toy Stories, two Nemos, multiple Cars and an impending Incredibles 2, there's a new original animation in town.

TRY CULTURE WHISPER
Receive free tickets & insider tips to unlock the best of London — direct to your inbox
Coco, the 19th feature film from the studio, encapsulates everything that we love about Pixar; namely, exploring new territory both emotionally and artistically. Straight from Pixar’s playbook, the stunning film is a colourful romp through dark subject matter.

Coco follows the adventures of Miguel (Anthony Gonzalez): twelve-year-old boy, aspiring musician, and rebel. As the prologue of the movie explains to us through a gorgeous Papel picado (the traditional Mexican art of paper-cutting) sequence, Miguel’s family has banned all music ever since his great-great-deadbeat-grand dad left home to seek fame, fortune, and artistic fulfilment – never to return.

But, like most Disney/Pixar characters, Miguel blatantly disregards his elders in order to follow his heart, and also his dreams. Inspired by his hero, local virtuoso Ernesto de la Cruz (Benjamin Bratt), Miguel plans to make his debut at the annual Day of the Dead musical talent show.

Unfortunately, he is thwarted by his music-hating family and a grave robbing gone wrong. Now, Miguel finds himself trapped between the lands of the living and the dead and must embark on a katabasis – a descent into the underworld. An unlikely friendship between Miguel and a desperate, down-on-his-luck skeleton unable to cross the magical border between the land of the living and the dead drives most of the movie’s emotional epicentre.

Under the careful artistic direction of Pixar, the highway to hell has never looked so good. Full of colourful skeletons and gorgeous visual homages to Mexican culture, Coco is certainly one of the most visually stunning films to come out of Pixar in recent memory. 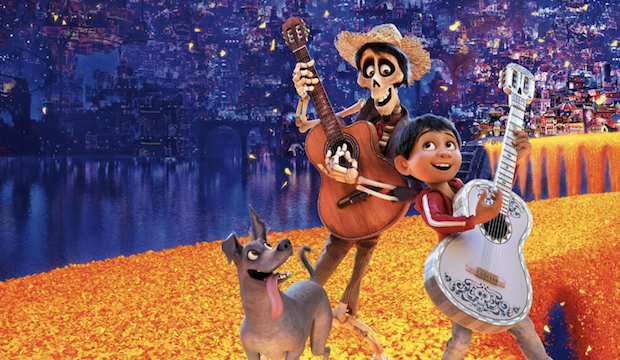 It does at times feels slightly formulaic. The Ratatouille-inspired plot pulls our protagonist through a whirlwind tour of the underworld laced with messages of morality about the importance of family. The calculated plot twists and turns seem to reveal the inner workings of the Pixar machine, designed to tug our heart strings and hit our emotional pressure points. Even the animation feels like something we’ve seen before, thanks to the Guillermo del Toro produced Book of Life (2014).

Despite this, Coco is a powerful musing on death, family, and show business, offering a much-needed celebration of Mexican culture. It will have you laughing, crying, and wanting to call your relatives.