Facing the sack after low-ratings and low shares, Beale announces that he will kill himself on air to the initial dismay of the network UBS. But Beale’s frenzied behaviour strikes a chord with the American public, and programmer Diana Christensen (Michelle Dockery) sees an opportunity to turn Beale into the angry prophet the public so desperately desires. 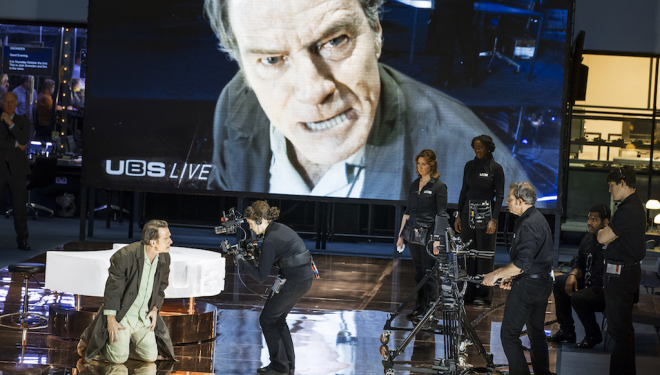 Cranston is undeniably brilliant as Beale. He performs the demanding role with a thin smile and fiery temperament. His ferocity, staring point-blank into the onstage cameras, is deeply unsettling and radiates outwards like the wavelengths transmitting his larger-than-life image on the huge screen centrestage. Other performances from Doug Henshall as Max Schumacher and Tunji Kasim as Frank Hackett are strong, if not slightly eclipsed by Cranston. Dockery does well to give Diana over-the-top enthusiasm, but lacks complexity and ultimately feels very one-note.

Van hove’s staging is staggeringly innovative, using the language of film to tell much of the story. Moving cameras screen the action all over the stage, decorated in a modern and glamourised version of the 1970s. The newsroom and an actual restaurant serving three-course meals to National patrons act as perimeters to the main television set. But with the space used only infrequently and a disastrously unoriginal name — ‘Foodwork’ — the restaurant feels like a gimmick. Worse still, it means that other scenes are stranded on barely decorated sets, such as when Caroline Faber’s Louise Schumacher heartbreakingly interrogates her husband Max over his fidelity. 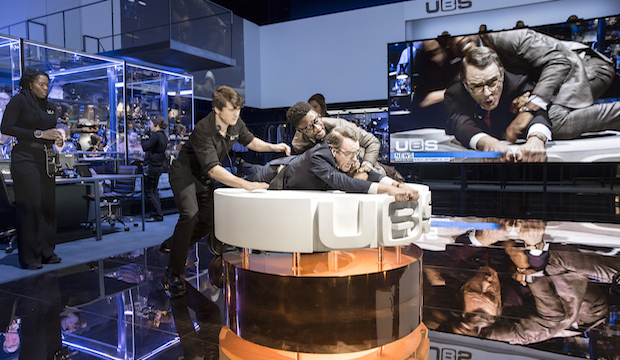 Such scenes are sacrificed for other truly spectacular moments of theatre. Cranston’s speech when he begins a nationwide chant of ‘We’re mad as hell and we’re not gonna take it anymore’, provides a mesmerising shift in the filmic language that sharpens the storytelling and successfully builds a mythology around him. The meeting with Arthur Jensen, the god-like owner of UBS, is perfectly satirical with haloed white light pouring outwards onto the audience.

Most of these moments are plucked from the film and are given creative theatrical spins. Less convincing are those attempts to be almost too much like the film: sharp cuts on the massive screen between cameras are disorientating and disrupt the rhythm on stage. Some admittedly remarkable technological achievements are simply gratuitous, such as when Dockery and Henshall are filmed walking seemingly in real-time from the Southbank directly onto the stage. 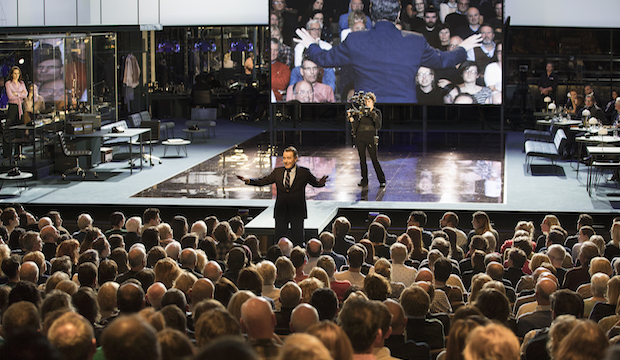 Nevertheless, Network is eerily timely in its interrogation of how screens and media conglomerates sculpt our ways of thinking. Hauntingly relevant, powerfully performed, and pioneering in its staging, Network resonates as much as the original film.