It’s a good question – and one that is played out over 90 minutes in new play Heisenberg: The Uncertainty Principle. Prolific playwright Simon Stephens (Port, Curious Incident, Punk Rock) uses the theory of quantum physics as a means of understanding the intricate, utterly unique circumstances surrounding a single encounter.

TRY CULTURE WHISPER
Receive free tickets & insider tips to unlock the best of London — direct to your inbox
‘I wanted to write a play inspired by the way music works in the gaps between notes. I discovered ‘The Uncertainty Principle’ and it struck me that all life is contained within it,’ he says.

It’s a lofty basis for drama, and the two-person play never quite loses its sense of self-conscious intellectualism.

The stage is a light box that shifts shape with each scene and goes through each colour of the rainbow as the play progresses. Stylised stints of physical theatre punctuate each encounter. 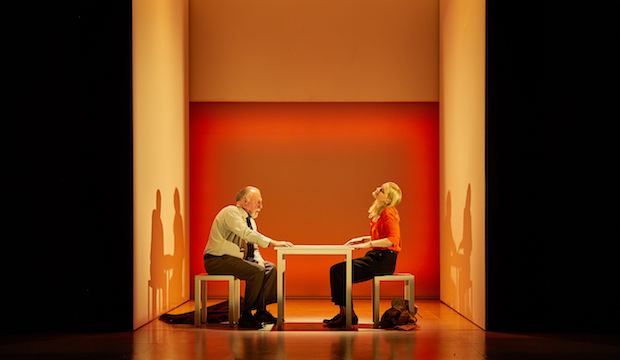 We follow 75-year-old English man Alex, played with gruff warmth by Kenneth Cranham, on a series of strange meetings with Georgie, a 40-year-old American woman.

Anne-Marie Duff plays the 'unpredictable and exciting' Georgie with gusto. She spins out a breathless web of lies and admissions, breaking conventions to artificially create a connection with a total stranger.

But, despite Duff’s best efforts and a few moments of insight, we are stuck in the confines of the Manic Pixie Dream Girl; instead of personality or originality we have a skittish caricature that seemingly exists to flesh out old men’s fantasies. Aside from her apparent emotional instability the only ‘exciting’ aspect of this woman is her readiness to have sex with someone nearly twice her age and her subsequent financial demands. Titillating for a few, perhaps; exasperating for everyone else.

Dialogue is often bloodlessly poetic ('animals have seams', 'personalities don't exist') with occasional comedy ('I don't feel; I fucking think') and the randomness at the core of the relationship renders the actions rather arbitrary. Despite the considerable talents of both actors, the most you really feel for either characters is irritation, with a side of bafflement.

There are flashes of striking depth; just think of all the angst and affection contained and concealed in every single stranger; just imagine what you could experience if you could create a connection.

It’s just a shame that this story of uncertainly, randomness and excitement ends in the most predictable way — with a beautiful but unstable young woman shagging an old man. Quote complex quantum mechanics all you like; it doesn't make tired, sexist stereotypes any smarter.