You can still secure tickets to this long sold-out show by entering the National Theatre ticket ballot. Ballots are open for entry at midday on selected Fridays (26 May, 3 June). It stays open for entry for approximately a month, before winners are selected at random. Successful entrants will receive an email inviting them to book £20 tickets for a selected booking period.

The two-part 1993 play is a landmark of modern theatre, with Pulitzer, Tony, and Drama Desk awards, and an HBO mini-series. It’s a story that has transcended the realm of fiction to challenge broader perceptions of homosexuality.

Oh, and it totals almost eight hours of stage time.

Throw in a 24-carat cast led by Nathan Lane, Andrew Garfield, and Denise Gough and this National Theatre revival is a serious, sold-out Event.

Composed of two plays – Millennium Approaches and Perestroika – Angels in America is a mighty, meaty, genre-busting exploration of the 1980s AIDS crisis. It’s a sincere, unflinching portrait of pain, a surreal journey into delusion, and a probing portrait of spirituality – often simultaneously.

Director Marianne Elliott draws on the potency of Kushner’s writing and the talent of the cast to helm a production that feels truly tremendous.

Subtitled A Gay Fantasia on National Themes, Angels in America is an epic call to arms, but it's also an intimate domestic drama with four people at the crux. The drama is vast in scale and theme; but the story revolves around six people and is played out through intimate two or three-handers. 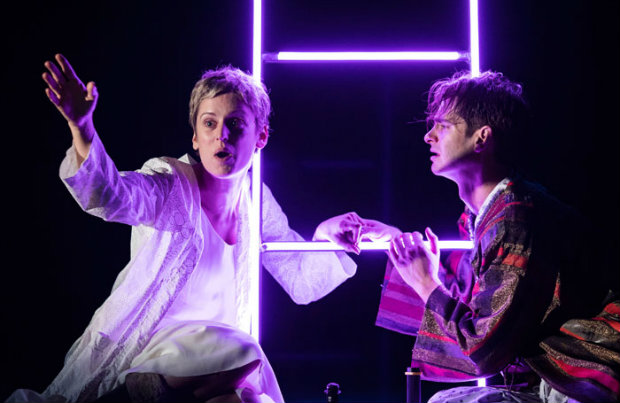 Denise Gough as Harper and Andrew Garfield as Prior. Photo by Helen Maybanks

There’s gay couple Louis and Prior, whose relationship is ravaged by the messy reality of an incurable illness. James McArdle delivers Louis’s political rants and tender apologies with equal fluency. Andrew Garfield draws on effeminate affectations to portray Prior with brittle self-awareness, whether bedazzled in drag or sweating in stained hospital gowns. It’s an affecting performance, which scoops out every last emotion.

Broadway legend Nathan Lane is similarly stupendous as fast-talking, ultra-right-wing lawyer Roy Cohn. Switching between phone-calls, growing increasingly puce in the face, he is almost incandescent. As he becomes increasingly ill, this almighty spirit flickers out with agonising volatility.

Meek, unhappily married Mormon Joe Pitt (Russell Tovey) wants to supercharge his law career in Washington but his wife Harper (Denise Gough) is fixed in a haze of valium and depression.

Nurse Belize (Nathan Stewart-Jarrett) is there to mop up the blood and remind us, the liberal bourgeois, that race still matters. 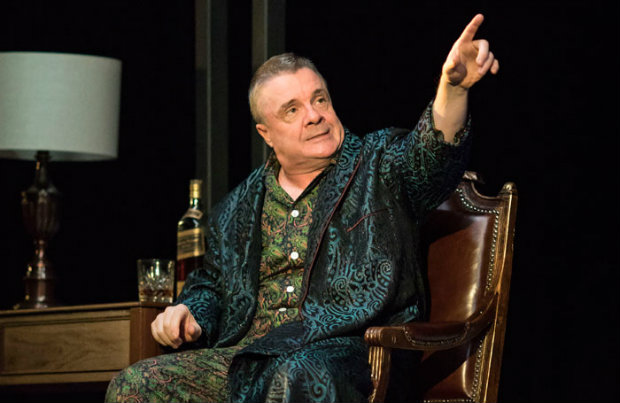 Illness, hallucination, and sheer chance throw these six people together in a story that spans clear-cut reality and celestial visions.
In terms of form, content, themes, and length, this is not easy, nap-in-the-back-and-have-a-laugh theatre. The two plays (three hours 30 minutes and four hours long respectively) are staged on consecutive nights and then back to back on selected days (a mammoth eight hours of theatre time).

For all the undeniable brilliance of the writing, production and performances, the experience is an ordeal. You leave, bleary eyed, reeling from all the suffering and spiritual upheaval.

Angels in America is relentlessly intense and lachrymose but humour breaks out of the bitterness and the apocalyptic imagery climaxes with a resoundingly hopeful emphasis on ‘progress, migration, motion’.