Ruth Wilson (The Affair, Luther) shines as the icy eponymous heroine, a woman stifled by the limited definitions of wife and woman. Six months after marrying peppy academic, Tesman (Kyle Soller), she is frozen by monotony and expectation. She is scrutinised and touched by husband, his aunt, his pally male colleague. In a sharply physical performance we can see Hedda tense and flinch at the invasion, moving with hyper-awareness around the stage. Wilson luxuriates in the sulkiness and spite, spanning the spectrum of mental illness without ever courting pity.

The ambivalence of Hedda’s stultifying despair and destructive breakdown is remarkable, over 100 years since Ibsen was writing, for its modernity and realism. But in the hands of writer Patrick Marber and auteur Ivo van Hove the tragedy is dislocated from life and shattered into a series of symbols. 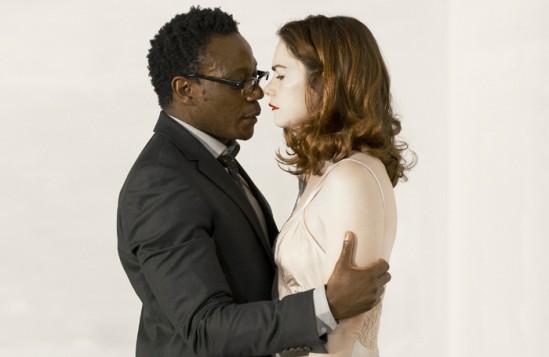 Hedda slumps over a piano in an otherwise bare, doorless plaster-boarded box, designed by van Hove’s longtime collaborator Jan Versweyveld. The lighting, streaming in from one large window, is eerily atmospheric. Later, when manipulation and desperation take full destructive effect, shadows morph Hedda into a monster towering over her shrunken husband.

The minimalist aesthetic is punctuated with heady visual metaphors: fresh flowers that Hedda flings across the floor, sharp-spiked stiletto shoes worn by all the women, the late General Gabler’s pistols mounted in a display cabinet.

It’s striking but hardly subtle. That cinematic barely-dare-to-breathe tension that van Hove brought to A View from the Bridge breaks through the frigidity in just a few unsatisfactory flashes.

At more predictable moments the Joni Mitchell/ Jeff Buckley soundtrack combined with the hackneyed symbolism of a woman withering like a hothouse bouquet feels like pretentious poetry. Again, when Hedda’s powerlessness is demonstrated with violent violation as her male blackmailer spits blood between her legs, the whole ‘defiling the female body’ thing feels all too familiar and frustrating.