Within his scalpel-sharp scripts the daily dramas of government graduate from the stuff of broadsheet commentary into thrilling theatre. And audiences and critics can’t get enough.

State surveillance inspired engrossing drama in Privacy at the Donmar Warehouse, the hung parliament of 1974 was transformed into compelling comedy and Machiavellian scheming in This House, (National Theatre and West End) and the rise of The Sun newspaper has become a headline-grabbingly great play currently running at the Duke of York’s Theatre.

Now, Graham scrutinises 25 years of Labour Party history in a collaboration with the Michael Grandage Theatre company and Headlong.

TRY CULTURE WHISPER
Receive free tickets & insider tips to unlock the best of London — direct to your inbox
Set in a Nottinghamshire constituency, Labour of Love is a comedy charting the party from Neil Kinnock to Jeremy Corbyn. Instead of overt documentary theatre and impersonation, it’s acutely-observed fiction revolving around very real events and moral dilemmas. 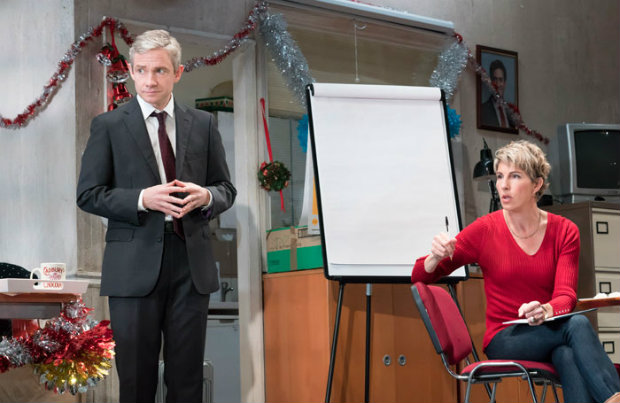 In snapshots spanning a quarter of a century, we see Labour MP David Lyons (Martin Freeman) and his constituency agent Jean Whittaker (Tamsin Greig) negotiate the moral core of the party and the daily grind of politics. The time-hopping is staged superbly: bouffant hairstyles of the early 90s diminish and grey; flat screens replace fax machines in the same shabby office; and the framed photo of a different Labour leader hangs on the wall with each flashback.

We watch the closure of the quarry, the chances and conflicts presented by Tony Blair and the constant compromises between principles and power. This core conflict is played out by the two lead characters. New Labour Tony-Crony David (played with all the everyman warmth you’d expect from Martin Freeman) believes in making concessions in order to gain power.

But his constituency officer Jean is a red flag waving leftist, with a razor-sharp tongue. Tamsin Greig, who stepped in to cover the role just weeks before opening, makes the gibes and commitment to the party intuitive and innately likeable.

Jean and David resist and rely on each other in equal measure. They represent the rift between ideology and pragmatism without ever feeling like mere symbols. Their strange dance towards union is stuffed with humour and warmth – and it’s also among the most illuminating appraisals of contemporary politics you’ll see on stage.

Discuss, debate, consider and learn at the best talks in London 2017
Sign up to CW’s newsletter
By entering my email I agree to the CultureWhisper Privacy Policy (we won`t share data & you can unsubscribe anytime).