And certainly Natalie Dormer’s Vanda Jordan is one deity we dare not cross. The Game of Thrones star dominates David Ives’ two-person play as an abrupt but ambiguous actress, who arrives late to auditions for a new stage adaptation of Leopold von Sacher-Masoch's 1870 novella, Venus in Fur.

There’s a steeliness beneath her flustered, ditzy exterior and, after brazen insistence, Vanda persuades Thomas to read through the script with her.

Lazy American vowels are replaced by a clipped, cool continental accent as Dormer demonstrates her dominance over both versions of Vanda in this play-within-a-play.

Graudually, working through a script shimmering with domination, submission and desire, boundaries between the rehearsal room and the fictional confines of Sacher-Masoch's story blur. 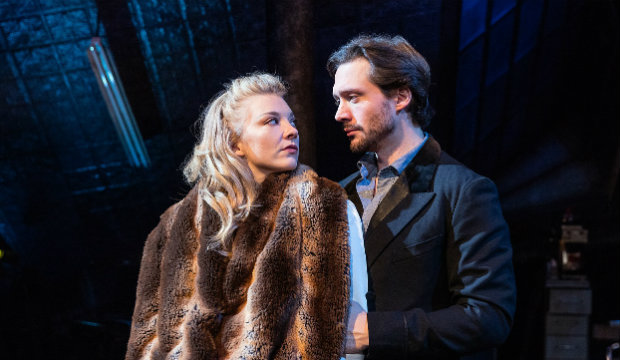 Over an intriguing 90-minutes we learn that it’s not just a name this slippery young woman shares with the character; she knows and unnerving amount about the writer, his script and his personal life.

And this is where the play fails to really strike. Thanks to the potency and control of Dormer’s performance, and strong support from Oakes, chemistry and tension pulsate from the stage. But the David Ives’ script never channels this intensity to any kind of climax. The central mystery surrounding the compelling, confusing encounter is lost in rather self-indulgent meta-theatre and we leave feeling strangely unsatisfied.

Thankfully, there's a goddess to enrich the flimsy plot. And it's worth watching Venus in Fur just for Natalie Dormer cracking her whip.