Down in the ‘pit’, standing audience members sway along to The White Stripes’ Seven Nation Army. In the premium seated areas around the edges some grey-haired spectators make a point of putting hands over their ears. A few walk out midway through.

Drawing together the Elizabethan tradition of groundlings standing around the stage with bolder immersive elements, the production makes us into the friends, Romans and countrymen of Caesar’s reign.

It's a pacy show, cut down to two hours with no interval, emphasising the turbulence and escalation of unrest. Dressed in a distinctly Nick Hytner aesthetic of modern military minimalism, actors stand on a raised stage in the middle and stay scattered among audience members. 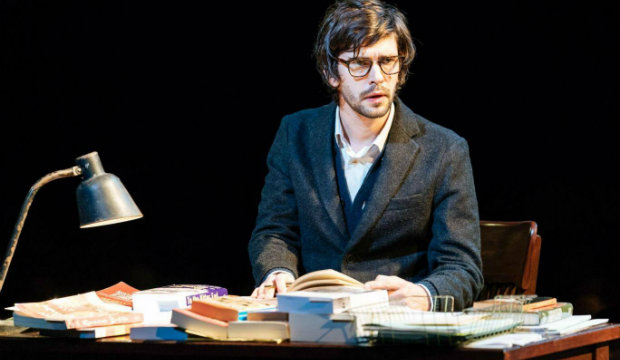 Ben Whishaw is a bookish, occasionally effeminate Brutus, egged on by Michelle Fairley’s spirited Cassius. The unrequited love that charges the characters’ camaraderie and conflict is clarified as Cassius’s realisation ‘You love me not’, smarts with desolation and dejection. Whishaw’s Brutus is comically oblivious and offhand, quipping ‘I do not like your faults’.

As he bid us ‘Hear me for my cause and be silent’ Whishaw delivers Brutus’s famous speech with the cadences of a Liberal MP, confident that his cause is the only reasonable, rational course.

In the second great speech, David Morrissey captures Mark Antony’s cunning without diluting the tangible effect of grief. He trembles with rage as he appeals to our passions, pointing out the bullet hole in Caesar’s bloodied jacket and riling up the mob with the promise of 75 drachmas each before summoning us to revolt.

Emotion trumps reason as allegiances switch with timely volatility. We see, in Shakespeare’s verse, the embodiment of what we now call ‘alternative facts’. Power is won through performance and manipulation; Romans, like voters, are an audience looking to be moved.

It’s electrifying if you’re standing among the action, jostling at the calls to arms and crushing around a mosh pit of violence when revolution comes. Plus you get rare, up-close access to a cast of especially fine actors.

Overlooking all this from the seated areas, the show must feel more ordinary – and perhaps a little messy. The acting is still of the highest quality, but the power of this production is the way in which its atmosphere engulfs you.

So make sure you join the masses.