Christopher Hampton takes this 17th century French satire and thrusts it into Trump-era America, retaining the deception from the original text while adding a new dimension of hypocrisy to match the modern day. With Peaky Blinders’ Paul Anderson as Tartuffe and George Blagden as Damis, this is a starry adaptation that fails to resonate until a surprising and clever ending.

TRY CULTURE WHISPER
Receive free tickets & insider tips to unlock the best of London — direct to your inbox
A bare, modern design with a moving central frame surrounds the action as Sebastian Roché’s Orgon is seduced by the fake piety of Anderson’s Tartuffe. Although not distinctly Los Angeles, director Gérald Garutti focuses on how Molière’s satire on the hypocrisy of religious fanaticism can be contextualised in America. 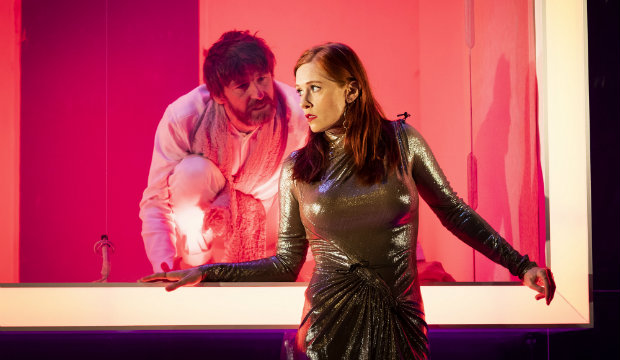 The actors change from English to French throughout, and surtitles bordering the stage switch languages accordingly. The reason behind having the piece in two languages however is never made clear, particularly given its American setting. Although parts of the text are modernized, oddly Molière’s rhyming couplets aren’t mirrored in the English, which sadly detracts from the original wit of the text and creates a clunky rhythm throughout.

Some performances stand out. Paul Anderson’s Tartuffe has a Southern drawl, speaking predominantly in English, like a revivalist preacher. He’s as enchanting as he is sinister, yet his character seems somewhat out of context with the rest of this world. Roché’s Orgon is brilliantly aloof, but it’s Claude Perron’s Dorine that steals the show, providing deadpan one-liners and sardonic wit.

But the performance lags until a sharp finish reorients our understanding of this classic comedy and almost counteracts the awkward pacing that comes before. If more of the production was like its ending, this version of Tartuffe could be truly transformative.