Michael Longhurst, who directed Nick Payne’s Constellations, colours Shaffer’s epic tale with both pomp and irreverence: the world of Mozart moves effortlessly from the vulgar to the sublime. With the Southbank Sinfonia's beautiful accompaniment, Amadeus is high drama and symphonic storytelling at its best.

Lucian Msamati (Ma Rainey’s Black Bottom) is a stoic, calculated Antonio Salieri, who only cracks when listening to Mozart’s music, turning tender and vulnerable. Adam Gillen as Mozart on the other hand is perfectly haughty, infantile, and erratic. He stamps about with a rebellious attitude, but also displays a dependence on others that not only evokes pity but compassion. Both are opposite yet equally astonishing performances that complement and, just as with their characters themselves, almost rely on each other. 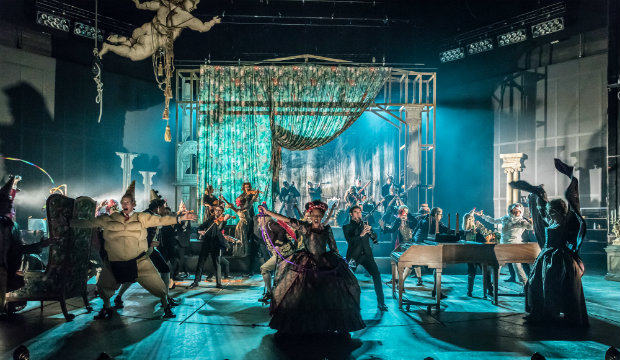 History, legend, scandal, and music make up the components of Shaffer’s prodigious script. As upstart young talent Wolfgang Amadeus Mozart galvanises Vienna with his remarkable music, established composer Antonio Salieri is consumed by jealousy. It is a searing meditation on genius, rivalry and what it means to be immortal.

But Longhurst also highlights the playful and spirited wit of the text, poking fun at the myth of genius as well as affirming it. Designer Chloe Lamford’s costumes are highly colourful, decadent and delightfully anachronistic. The Olivier stage is transformed from modern rehearsal room to 18th-century orchestral pit, and Mozart’s music enriches until the final crescendo moves through the audience with thunderous force.

Throughout the play Mozart swims against the currents of convention and his innovation is met with resistance. But at the Olivier invention and creativity are so warmly welcomed. Amadeus is not merely a reproduction or a homecoming, but a soaring and spirited revival.