Oslo, J. T. Rogers' political thriller about negotiations between Israel and Palestine is an intelligent, moving reminder that peace is fragile

16 CW readers are interested
Oslo review 4 Oslo review Lucy Brooks
After 50 years of conflict, bloodshed and sprawling multinational negotiations, how do you begin to broker peace between Israel and the Palestine Liberation Organisation?

Where the rest of the world failed, two Norwegians created a secret back channel to bring about the first official agreement between Israel and Palestine, 1993’s Oslo Accord.

This recent political history is combined with high-stakes drama and wry humour in J. T. Rogers' play Oslo. It absorbed audiences and impressed critics at the Lincoln Centre in New York in 2016. Now the play comes to the National's Lyttelton Theatre for a UK premiere before transferring to the Harold Pinter Theatre on the West End.

TRY CULTURE WHISPER
Receive free tickets & insider tips to unlock the best of London — direct to your inbox
Oslo is a dense, detailed, three-hour play of Shakespearean proportions. It delves deeper than the reported facts surrounding the Oslo Accord to give a vivid portrait of the people who orchestrated it.

On a stage that shifts between a series of state rooms, behind the closed doors of history, we see the talks from conception right through to completion. 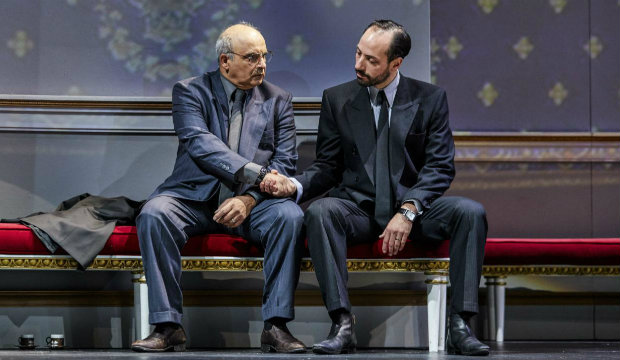 Peter Polycarpou and Philip Arditti in Oslo. Photo by Brinkhoff/Mögenburg

The play centres around Mona Juul (Lydia Leonard), an official in the Norwegian Foreign Ministry, and her husband, Terje Rød-Larsen (Toby Stephens), then director of the Fafo Institute for Applied Social Sciences. Together they decide to host talks between Israel and Palestine, eschewing the accepted third-party negotiation models for intimate and direct confrontation.

Rogers interviewed the couple extensively and built the play from these first-hand accounts. The result is as much a personal story about marriage and secret machinations as it is a thriller about diplomacy and global politics.

Negotiation and policy-making could make for a dry evening but Oslo fizzes with life and personality. We expected the sobering, insightful exploration of conflict; the jokes and general warmth were a happy surprise.

Each diplomat, politician, academic, lawyer, and representative feels wholly three-dimensional, showing us both the horror of historic enmity and the strange camaraderie that came from the peacemaking process. The cast impressive across the board – especially with the Norweigan/Middle Eastern/Israeli accents.

But Philip Arditti is particularly enjoyable as a machismo, Machiavelli-quoting Israeli minister Uri Savir, who strikes up an unlikely bond with the PLO’s Ahmed Qurei (Peter Polycarpou) .

As a play and history and politics, Oslo is intelligent, thorough and satisfying. But it is much more than that; it’s a story about personal bravery and determination and a sharp reminder that peace is a precious, fragile thing.

Oslo will run at the Lyttelton Theatre until 23 September, and transfers to the Harold Pinter Theatre in the West End from 30 September until 30 December 2017.