James Graham's satire about the rise of The Sun newspaper is a shrewd insight into the gutter press, and our appetite for sensation

It’s a story as sensational as any tabloid headline, and it makes for titillating, chilling theatre in James Graham’s Ink.

Having exposed party politics in This House (National Theatre 2012; Garrick Theatre 2016) and state surveillance in Privacy (Donmar Warehouse 2014), the playwright turns his attention to Fleet Street in the late 60s.

Over three hours, the rule of the red top is traced back to its inception with documentary-style precision. Director Rupert Goold keeps you hooked with a pacy production featuring songs, physical theatre and headline montages.

Instead of the media mogul we know (and largely loathe), we see a young, rebellious Rupert Murdoch, played with squirmy urgency by Olivier-winner Bertie Carvel.

He buys an ailing daily newspaper and recruits wolfish editor Larry Lamb (Richard Coyle) to break the rules and beat The Mirror. 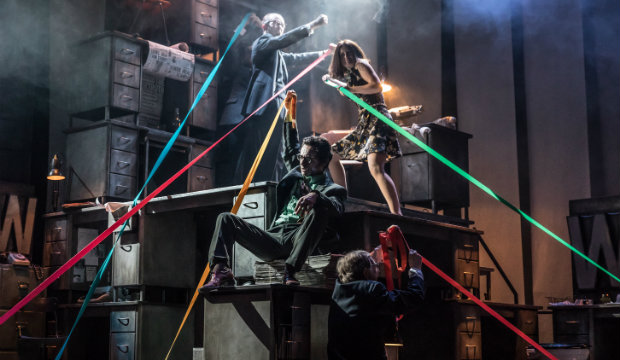 Across a towering, ink-stained stack of desks, in a thick fug of fag smoke and whiskey fumes, a pack of journalists chip away at tradition to reconnect with readers. What the people really want, these editors realise, is free stuff, sex and telly, communicated in an in-yer-face layout ‘that turned ugly into an artform’.

At first, it’s all puns, games and a permanent state of exclamation. There’s a gung-ho democracy to flouting formality and poking fun at privilege. Even an audience of liberal, Guardian-reading West End theatre-goers find themselves rooting for the plucky underdog.

But as the battle for readers intensifies, morals must decline for sales to increase. We know how it ends; we still see buxom evidence on page three of The Sun.

You can blame the chairman for financing, or the editor for creating, but what about the people reading? Instead of attempting to point the finger, Ink revels in the ambiguity. In terms of the newsroom holy grail – who? what? where? when? why? – this shrewd snapshot of The Sun's rise is certainly A Good Story.

But it's the 'what next?', left unresolved, that really fascinates.