Final Portrait, about the experience of sitting for a Giacometti painting, is a good likeness artfully composed

1 CW reader is interested
Final Portrait 4 Final Portrait Matthew Robinson
Geoffrey Rush is the best swearer in the game. In The King’s Speech, his speech therapist encouraged Colin Firth’s stammering George VI to cuss fluidly; in Final Portrait, his Alberto Giacometti takes effing and blinding to the next level. ‘Fuh-AAARRRGHHHHH-kugh’ he growls at the canvas when things aren’t going well. ‘Poo-TAIN! MeeeerDUH!’

Things are often not going well when Giacometti sits at the easel; perversely, this means they’re going very well. As Giacometti’s brother Diego (Tony Shalhoub) explains to writer James Lord (Armie Hammer), Alberto thrives off discomfort – the intention is not to be completely unhappy but perfectly unhappy. Lord nods but doesn’t sympathise. By this point, he’s been sitting for Giacometti’s titular portrait for much longer than expected, and his bum is getting sore. He’d settle for comfort.

TRY CULTURE WHISPER
Receive free tickets & insider tips to unlock the best of London — direct to your inbox
It’s 1964 in Paris, and Lord – a friend of Giacometti’s – has agreed to spend an afternoon being the subject of a painting. Suave but brisk in his mid-century American confidence, Lord believes he can play muse for a couple of hours before heading back to New York. Considerably less business-like, Giacometti persuades him that another afternoon’s work is necessary; the following day he begs for one more session. And then another.

When he gets Lord to postpone his flight for the second time, it’s clear that precise time-keeping means even less to the Swiss artist than banks do: ‘I’m Swiss-Italian,’ he protests when Lord argues that it’s a betrayal of his nationality to keep money stashed around his studio in grubby paper bags. He’s even less bourgeois in his romantic life. Forced to stick around for weeks waiting for the ordeal to be over, Lord witnesses Giacometti’s tempestuous and tender relationship to wife Annette (Sylvie Testud) and his romance with prostitute Caroline (Clémence Poésy). 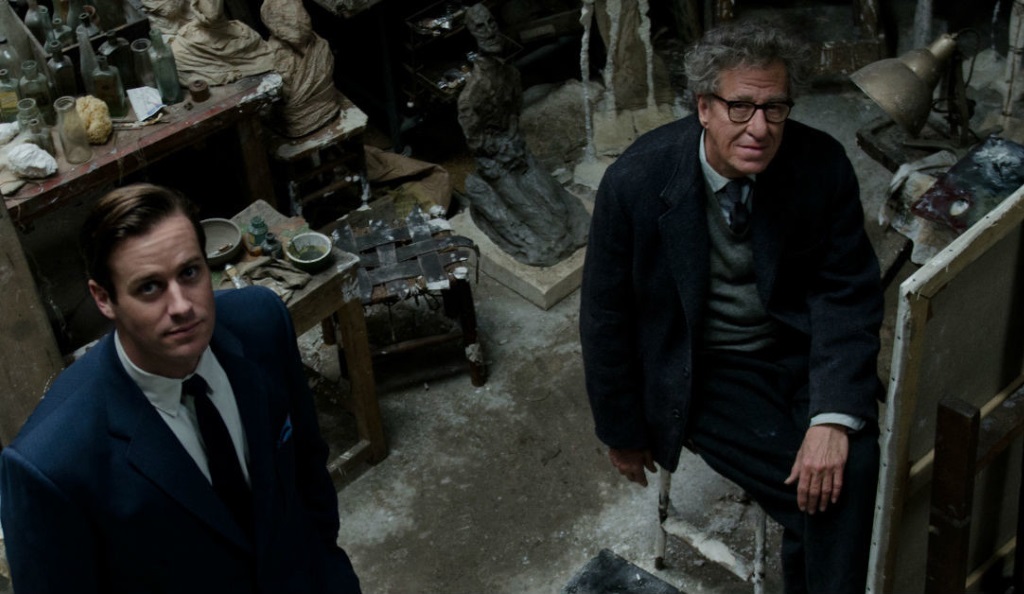 The film itself is comparatively mild, although it never has the stale, stiffish air of over-reverent biopics. It could be said that Stanley Tucci’s film is more interested in eccentricity than genius, but the conversations between Giacometti and Lord are intriguing, and they’re believably acted by Rush and Hammer.

Hammer again pulls off his affable trick of making a handsome, tall, baritone-voiced alpha-intellectual seem like a bit of an underdog. Rush certainly sounds the part, as mentioned, and he looks it too: when he stands face-to-face with a plaster Giacometti sculpture, Tucci’s camera lingers long enough to allow us to notice how the crags and creases are mirrored.