A Ghost Story is, well, a ghost story, from the director of Pete's Dragon and Ain't Them Bodies Saints, starring Rooney Mara and Casey Affleck

A Ghost Story film review 4 A Ghost Story film review Matthew Robinson
This doesn’t immediately seem like a film that needs much explaining. It’s called A Ghost Story, and the protagonist is a ghost – a person under a sheet with two eye-holes cut in it. This ghost haunts a house, mostly watching the occupants but occasionally hurling objects and making the lights flicker poltergeistishly. It’s that simple.

On paper, it’s a bit of a joke, like an arch theatre production by a precocious child in a Wes Anderson film. It certainly wouldn’t appear to have any of the enriching ambiguity of Olivier Assayas’ baffling spiritualist chiller Personal Shopper. But director/writer David Lowery takes the time to let his themes breathe, and his straightforward telling doesn’t undermine A Ghost Story’s sense of cosmic mystery.

‘C’ (Casey Affleck) and ‘M’ (Rooney Mara), named so only by the end credits, live in a nondescript suburban bungalow. In fact, C and M are themselves fairly nondescript: Lowery’s script doesn’t reveal many details about either of them. (He’s a musician; she’s not assigned a hobby, let alone a vocation). As played – or maybe ‘embodied’ – by the wan Affleck and Mara, the only things we know about them are the most basic and essential facts: that they eat, sleep, and love. That they live.

TRY CULTURE WHISPER
Receive free tickets & insider tips to unlock the best of London — direct to your inbox
They do, at least, until C dies in a car crash. M, summoned to the hospital to identify the body, returns to an empty home and continues to eat and sleep and live; C, bypassing a door into the afterlife, follows her home and continues to love.

Invisible, he watches his widowed wife go through the long and undemonstrative process of solitary grief (sitting in darkened rooms, eating pie etc.); he watches her move on; then he watches her move out. C himself remains behind with half of the film’s running time yet to go. Almost incredibly, Lowery’s film starts to become really interesting when one of the two protagonists disappears and the other is completely obscured. 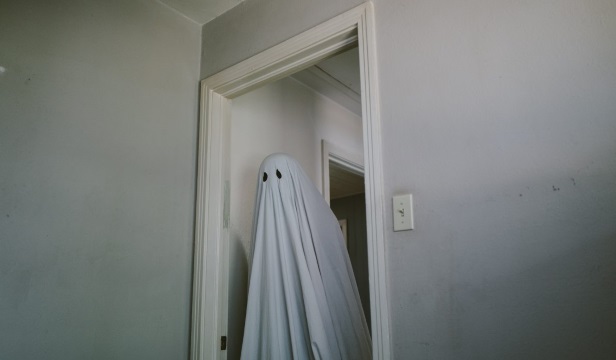 Death makes C even more nondescript – for most of the film, he’s entirely covered by the increasingly grubby sheet. Even his eyes are invisible through the peepholes. Affleck’s role could be played by an extra or, potentially, a helium balloon and coat hanger. You wonder if he was checking his Instagram feed the entire time. It’ll be an interesting indication of Hollywood nepotism if Affleck finds himself nominated during awards season. One suspects that if multiple sexual harassment allegations are no bar to Oscar victory then anything is possible.

Whatever your distaste for the man, though, it’s to the benefit of the film that you know he’s under there. Affleck is a part-menacing, part-wounded presence, and you’re never sure whether you’re afraid of his ghost or afraid for it. The fear is definitely there, though, in a clammy low-voltage form alongside the melancholia and sense of wonder. With his very low-fi special effect, Lowery has restored the sense of uncanny to something that has long been a harmless Halloween cartoon.