From its opening frame, the film is exquisite. Each scene is composed with painterly flair, and the first entry of Louis XIV is no exception. Having returned from a hunting expedition, during which he injures his leg, the aged king sags in an upholstered wheelchair. Pink chrysanthemums bloom around him, and he cuts a pathetic figure, dwarfed by an enormous wig and by two much younger valets. Almost nothing needs to be said here to embellish the viewer’s impression of a patriarch gone to seed. A feeble two-word command by the King – ‘allez, poussez’ – suffices to complete the picture.

This opening scene sets the tone for the rest of the film. Displaying the dying king at various stages of his decline, but ensconced in a luxurious palace, The Death of Louis XIV mixes the viscerally disgusting with the visually enticing. Plates of plump green grapes, glistening jellies and creamy cheeses pass before Louis XIV, who is surrounded by his courtiers – and are left to sweat, curdle and dissolve, as he is unable to swallow them.

It’s hard to overstate how much parts of The Death of Louis XIV will make your skin crawl. They do so in a way that is hard to pin-point, but which lies in the sluggish buzzing of houseflies in the king’s bedchamber, and in a particularly nauseating parallel between a valet poking around in a plate of tomatoes and a doctor of the Sorbonne extracting the king’s intestines during autopsy.

Director Albert Serra’s preoccupation in the film with food distils what is so unpleasant about the death of the monarch. Once omnipotent, vibrant, and life-giving, the Sun King is exposed as vulnerable to decay, arranged on his bed like a still-life of slowly spoiling fruit. Food is a symbol with a huge amount of mileage in this film, helping make clear to the modern viewer the monumental significance of the king’s death. When a roomful of courtiers applauds Louis as he eats an egg, you have to laugh – until it becomes obvious that something so mundane as a good diet, by prolonging the king’s life, carries the highest political significance. 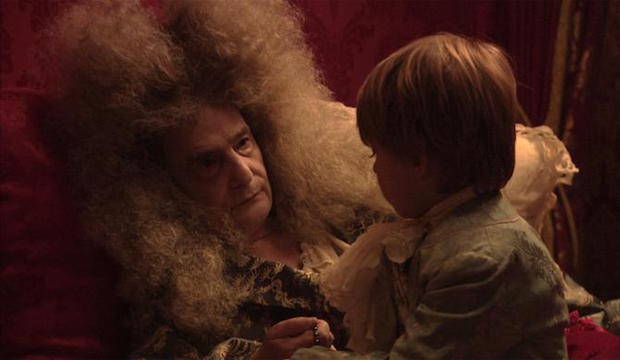 Jean-Pierre Léaud communicates an incredible range of emotions in the grunts and wails of a dying man. Outrageously clad in cloud-like wigs and brocade, he has the air of an ageing glam-rocker, and his craggy face gives the impression of a death mask even in life. Léaud brings to life the claustrophobia of royal convention. The king is paralysed by ritual, refusing to drink unless from a crystal glass, even during bouts of wheezing. Images of birdcages and lattice windows are unsettlingly juxtaposed with a running soundtrack of birdsong, wind, and crickets that creeps in from the outdoors. The audience is never allowed to forget the way the Sun King is sealed up like a mummy in a tomb, perhaps as shackled by convention in his earlier life as he is in death.

Watching The Death of Louis XIV from start to finish is not to be undertaken lightly, but it’s the only way to watch it. Serra handles the film's glacial pacing, which in works in that it parallels the downward trajectory of the king's life, with irony, stretching out shots as if toying with his viewers. However, when the substance of a scene isn’t enough to hold one’s attention, it’s easy to lose one’s place in the action, and the film might have done better to condense moments that are less significant.

Nevertheless, overall, The Death of Louis XIV conveys slow, inexorable decline brilliantly and harrowingly. This is one to watch if you have several spare hours – and one or two afterward to emerge mentally from Serra’s opulent tomb.