Song to Song is, unfortunately, further proof that Terrance Malick needs to have a bit of a lie down

Song to Song film review 2 Song to Song film review Anna Livesey
Terrence Malick is dead. At least, that’s the only sensible conclusion to come to; Malick is dead, and the only person who knows is the one who’s impersonating him. Some fraud has decided that he can make a buck by donning the great director’s hat and sunglasses and churning out movies that superficially resemble Malick’s without demonstrating any of his insight or profundity.

What other rationale for how the man who made Days of Heaven and The Thin Red Line abandoned his painstaking approach – 20 years between those two films – and started knocking out cheap copies of his old masterpieces? The only other explanations are that Malick has lost his touch (unthinkable!), or that he was never that good to begin with (impossible!). Perhaps he has large alimony payments to make? At least it beats the idea that he’s mouldering away in someone’s attic, wrapped in a tarpaulin.

Because, despite a few reviews suggesting that Song to Song is a partial return to form, ‘Malick’s’ latest film is actually a continuation of the journey he considered with To the Wonder (2012) and embarked upon with Knight of Cups (2015): a leisurely, half-hearted ramble up his own backside. Of course, the view is still as cinematographically sumptuous as with every Malick film. But do you really want to join him on the trip?

As with Knight of Cups, Song to Song concerns itself with the existential tribulations of rich, beautiful, successful people – which is not a bad subject for a film, in itself. BV (Ryan Gosling) is a musician in Austin, Texas, a younger peer of industry veterans like Patti Smith and Iggy Pop (the film is littered with excruciating cameos). He achieves this distinction with the help of Cook (Michael Fassbender), a predatory mogul who once had a relationship with lyricist Faye (Rooney Mara) and ensnares beautiful waitress Rhonda (Natalie Portman). These four specimens of physical perfection love, betray, break up with, and forgive each other, all the while mooning about in a state of enviable ennui. 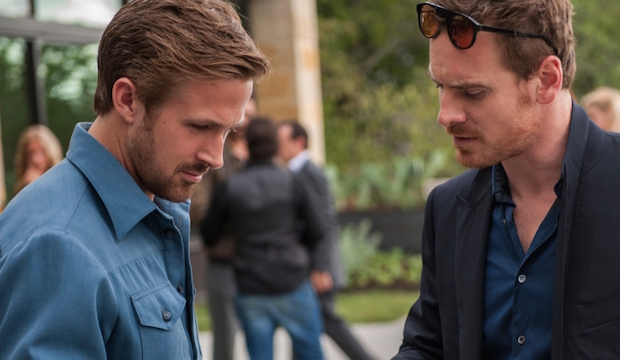 It’s actually a story with potential, but Malick has lazily wheeled out his trademark style in order to tell it. The woozy, fragmented montage treatment that perfectly evoked recollection of childhood in Tree of Life simply doesn’t work for the contemporariness of Song to Song: it feels like preemptive nostalgia, and the result feels like scrolling through a celebrity Instagram feed. One second you’re watching Fassbender and Gosling experience weightlessness in a private jet; the next you’re looking at Mara staring wistfully off-camera in the evening light. Tree of Life was Proustian in its vividness; Song to Song is #rememberwhen.

Malick’s tics have proliferated so rampantly that, in retrospect, it feels like the film contains nothing else. The director has never seen a field of tall grass that he didn’t send an actor to stroke pensively, and no object in Song to Song is free from molestation. Door jambs are there to be lightly brushed with fingertips. Matches are to be lit so that a brief flame can be contemplated. Curtains are to be wrapped up in and coyly smiled out of. Combined with the relentless voice-over whispering the effect is rather ASMR, and similarly soporific.

It can be fascinating to watch a great artist drop a clunker. It proves that even genius is fallible, and that the creation of a good work depends as much on dedication and hard work as on natural talent. But the novelty has worn thin. Someone resurrect Terrence Malick.